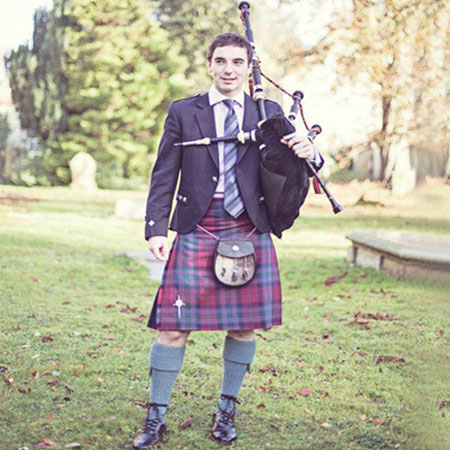 Adding a touch of class to every event, our talented Glaswegian bagpiper welcome guests with the authentic and traditional Scottish sound.

After discovering his raw talent at the tender age of 10, our young bagpiper has won multiple awards as a solo piper, and is today a piping tutor at the world renowned National Piping Centre in Glasgow.

Having gained extensive experience performing in many different pipe bands, Jonathan was also been invited to perform at New York's Tartan Week celebrations in 2005 and 2011, has appeared on various TV shows including Blue Peter, Flog It & Channel 4s 'T4', has been invited to various countries in Europe to perform and teach at schools.

In addition to this, he has also had the privilege of playing for HM Queen Elizabeth II, the Dali Lama, and most recently performed to a televised audience of 1.5 billion at the Glasgow 2014 Commonwealth Games Opening Ceremony alongside celebrities such as Amy MacDonald, Rod Stewart and Susan Boyle.

So, whether you’re celebrating a birthday, sporting event, wedding or anything in-between, Jonathan is there for all of your needs; his lively, upbeat performances and likeable personality are sure to make your event a success.

" VisitScotland have worked with Jonathan on media activity on several occasions. In each instance, Jonathan has been both professional and extremely affable. He built a strong rapport with each journalist and easily managed to not only maintain their attention, but gain their interest and respect. His piping skills and knowledge of his craft and instrument were exceptional, and I would not hesitate to recommend him for future work with any manner of international of local media. "

" Jonathan is a true professional and is an asset to any event. He is an incredibly talented and knowledgeable piper and can bring some great ideas to the table. He has a great attitude and nothing is too much trouble. When organising an event you have so many balls to juggle and things to worry about, but having Jonathan on board means you have one less thing to worry about. "

" Having had the pleasure of working professionally with Jonathan, I would wholeheartedly recommend him to any of my contemporaries that require an outstanding bagpiper with a great attitude, ability and work ethic. "

" A massive thanks for piping at our wedding on 9th Feb in Glasgow Art Club, especially for braving the cold to pipe Rhona O'Malley round from the Blythswood! Loads of guests remarked on your obvious talent and easy-going nature, thanks again…. "