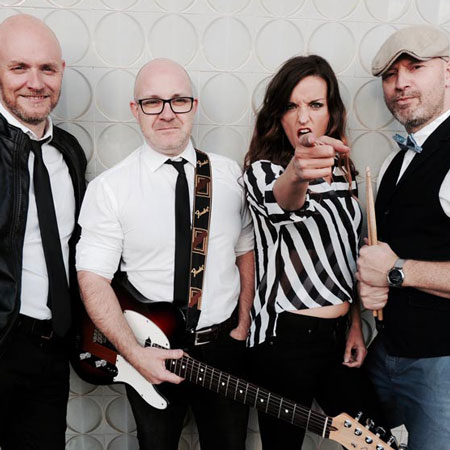 Book our fabulous bewitched party band for a truly magnificent night of musical entertainment. This star studded covers band will get the party started like no other act and their extraordinary performances are not to be missed. Featuring Keavy Lynch from iconic pop group B*Witched this high end party band bring that inimitable star power to every performance, and their fabulous sets are full of all the biggest contemporary and classic chart toppers to get your guests in the mood to party. With a flexible line up, world class musicians and a true pop legend on vocals this function band are leagues above the competition, so book our party band and give your guests an unforgettable night of non-stop party action.

Featuring the unmistakeable vocal talents of 4 time UK number 1 artist Keavy Lynch, this bewitched party band are sure to leave audiences spellbound. Our high end party band has delivered knockout shows up and down the country and their electrifying sets are perfect for weddings, parties, corporate events and festivals. Offering a huge selection of songs from the 60’s to the present day our covers band deliver a varied and constantly engaging set full of all the top class musicianship and dazzling stage performances you’d expect from such a star-studded party band.

With a set list ranging from classics by Andy Williams, ABBA, The Beatles and Van Morrison to contemporary chart toppers by Adele, Amy Winehouse, Michael Buble and Katy Perry, this party band offer something for any audience. Available as a rocking 4 piece or swinging 7 piece with male and female vocals and a glamorous horn section this function band are the ultimate choice for high calibre musical entertainment that makes a lasting impression.

Scarlett entertainment features a fantastic selection of cover bands for events and performances around the world.

Get in touch with our team to arrange booking one of our tremendous acts.

" The band I had arranged were double booked and let me down with only 12 hours notice. The band saved my party from disaster. They have a really great sound, are very professional, have all the latest tunes and the "Wow factor". They just knew where to take the party and how to keep the crowd dancing. I'm so glad they stepped in. Thank you guys - I'll see you at my next big party. "

" The party band were a big hit at our annual Gala Dinner in London. Their range of tunes was fantastic, with something for everyone, and they had people of all ages out of their seats and dancing. Great songs, great sound, great band. Thank you! "

" Thank you so much for making Emily's surprise 18th go with a bang! It's often risky booking people from the internet, but I have to say, from the initial phone call, I felt at ease. Not-withstanding your many miles of travel, on d-day, you turned up on time, provided us with your lovely dj, Mark, at short notice, and entered into the spirit of the surprise party! You pitched the audience just right and had us all dancing from the word "go"! My feet are still sore! An excellent band for an excellent occasion and I would have no hesitation in booking you again! Hope we meet again. A thousand thanks, "

" I just wished to say a big thank you for your great performance at our wedding on the 17th April. Everyone across all the generations really enjoyed themselves. The great selection of tunes kept the dance floor filled. It was brilliant to have you play live for the first dance and give us a great send off at the end. "

" They are true pro's and really know how to get a crowd going. A combination of great songs, vocals and musicians proved an absolute winner. I would have no hesitation in booking the band again or highly recommending them for any event where a kick ass, party experience is called for. "