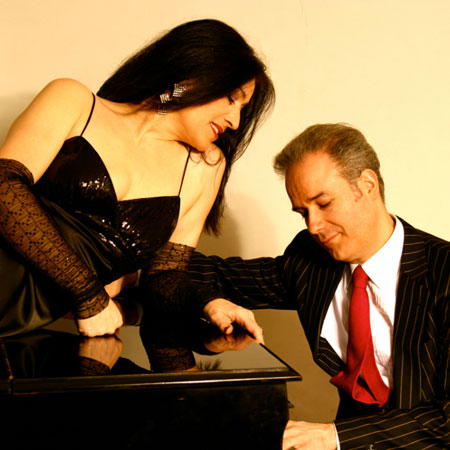 REASONS TO BOOK
Internationally renowned blues, soul and gospel vocalist
Considered one of the most impressive live performers in Switzerland
Known as "Zurich's First Lady of Black Music"
Outstanding pianist Dave is a respected specialist in blues and swing
Performed throughout Europe, Canada, Australia and the US
Live Music and DJ, Jazz,Swing,Blues and Jive

Blues vocalist Christina is hailed as the "blackest white voice in Switzerland". She lives and breathes her music, seamlessly blending the deeply frank and sensitive with impressive power and charisma. In the truest sense of the word, it is her soul that captivates audiences and makes any gospel or blues night with her an unforgettable experience.

In her youth, Jaccard actually started to train as an opera singer, but she gave it up to find her own voice. She ran the gamut of musical languages before finally settling for blues, soul and gospel. Jaccard has found the perfect musical partner in pianist Dave. Respected all over Europe as a king of stride and boogie, he is also a real specialist in blues and swing. In addition to providing subtle and sensitive accompaniments to Jaccard's singing, he is an outstanding soloist.

Christina's concert tours always extend beyond the Swiss borders. She regularly appears in neighbouring countries and has also played in Canada, Australia and the US. Despite being deeply rooted in soul, blues and gospel, she continues to master a variety of musical genres. In between her performances as a soloist and with her band, she always makes room for exciting collaborations and excursions into other fields. She was the guest star on the Swiss tour of the legendary Jackson Singers and joined forces with Gigi Moto in a blues/punk rock soundclash. She partnered Michael von der Heide and Maja Brunner in "Divamix" and has also took to the stage in various musicals. Jaccard lives in Zurich, where she works as a singing coach.