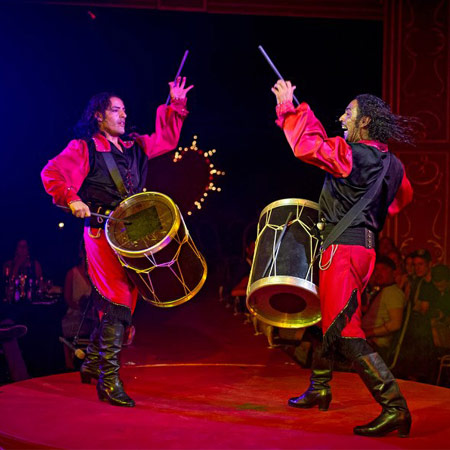 REASONS TO BOOK
A mesmerising high-energy act, originating from Argentina
Dramatic production with vibrant drums and intricate footwork
Electrifying visual effects, make up and costumes
Can also perform as vampires and demons for dramatic effect
Based in Spain and available to perform at events worldwide
Cabaret and Stage Shows, World and Cultural Acts, Cultural Shows, Live Music and DJ, Brazilian and South American, Drumming and Percussion

A mesmerising high-energy act, originating from the pampas of Argentina. A unique and entertaining experience using powerful vibrant drums, rapid rhythms and intricate footwork, all with a fiery modern twist.

After the impressive opening the Boleadoras are introduced as a surprise. The rapid swinging of the ropes and the sharp slapping of the balls on the floor join into the rhythm.

The Boleadoras are little balls tied on the ends of ropes. In Argentina they were traditionally used with a throwing technique to catch cattle. Later they also appeared in the folk dance of the Gauchos as a percussion instrument along with the feet and the drums. Simultaneously they give a strong visual image, which supports the energy of the dance.

The performance lasts between 8 and 20 minutes, using a minimum of 2 up to a maximum of 8 gauchos. The show can be performed as an individual act, part of a variety show or other production. May also include lights or fire and if required public participation.

The team have a traditional gauchos act and also recently have been performing dressed as vampires and demons for an added dramatic effect.

To find out more about how to book get in contact with our helpful team of Entertainment Experts.