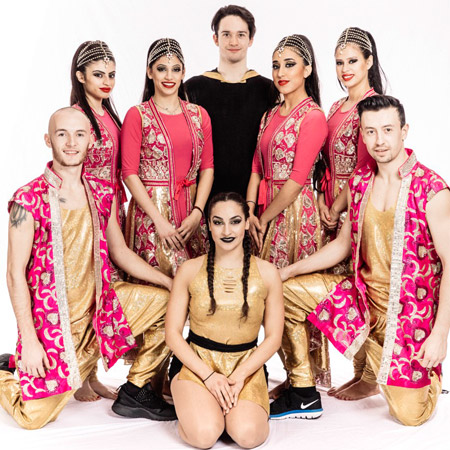 Leading entertainment agency Scarlett Entertainment UK are proud to represent some of the most talented and successful acts in the world today. Having made huge waves on the event scene after achieving incredible heights as Britain's Got Talent Performers and as a talent show act on Got To Dance, our amazing troupe of Bollywood dancers should be the only dance act you consider for your event. The exceptional Indian dancers are guaranteed to make an impression on audiences with their colourful, energetic routines.

This Bollywood Street Dance Fusion group are pioneers and industry leaders in advocating fusion dance and forging new standards in Bollywood, Bhangra, Street / Hip Hop, Acrobatics, Break Dance and Contemporary. Within a short time span they have created their own recognition and presence in the industry by becoming the first ever UK Bollywood Champions, Guinness World Record Holders and Semi finalists on Britain’s Got Talent 2016 and Sky1’s Got to Dance.

Our Bollywood Dancers’ unique and original choreography has seen them mesmerise the audience at several high profile shows and events including for the Prime Minister of India and ex UK Prime Minister David Cameron. With their constant display of vibrant, outstanding and breath taking dance routines combining different dance styles they give the audience a sensational experience of their versatility.

As well as working with leading brands such as SkyTV, BBC, Channel 4, Channel 5, London Mayors Office, Tate Modern and Madame Tussauds to name a few, our former Britain’s Got Talent performers recently danced for King of Bollywood Shah Rukh Khan and the queen Kajol on BBC’s The One Show. Having achieved worlwide acclaim for their incredible Indian dance skills, it is no wonder that our talent show act is highly sought after to perform at the most amazing events on the globe. Are you looking to bring sparkle and excitement to your corporate function, festival or private event? Speak to our team at Scarlett Entertainment UK and we can answer all of your questions about hiring Bollywood Fusion Dance group for your event.

" You are amongst those up there "

" You made me take notice the minute you started "

" Sensational! Best Dance Group on the show by a mile "

" Commend you on your energy and choreography "

" A force to be reckoned with "