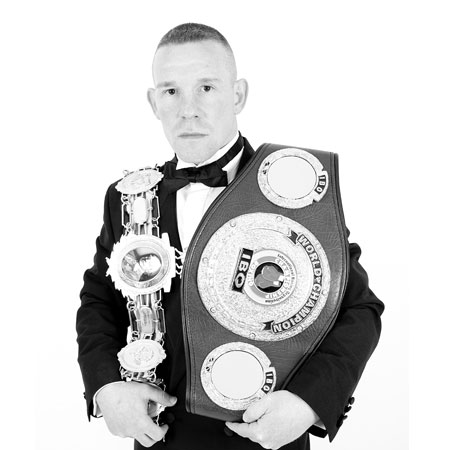 Former boxing super featherweight champion Charles offers exciting sports themed entertainment for corporate and private events and can include replicas of his belts as give-away incentives.

He is a former British, Commonwealth, Inter-Continental and IBO Super Featherweight Champion of the World, winner of the coveted world famous Lonsdale Belt which he won in record time winning every round at the match held in The Royal Albert Hall and  Guiness World Record holder for the most press ups (2,325) in one hour. During his career he beat renowned Scottish boxer Davey McHale and legendary American boxer Tom ‘Boom Boom’ Johnson. The only Cumbrian to ever win a British commonwealth and world title, Charles has received three civic receptions fro Cumbria County Council in recognition of his achievements.

Hire ex-professional boxer Charles for edge-of-your-seat boxing displays at sporting, branding, corporate, private events up and down the country. The UK boxing champion offerr unique audience participation events that are fun for all and ties in a ten minute press up display. His audience participation events are perfect for corporate team building sessions and a fun activity for stag dos. He will bring along his awards for all to see.

His live boxking demonstrations are great for sports enthusiasts, fitness and sports themed entertainment options. He is able to provide a boxing ring and punch bag which he brings to the events. He shows off his incredible punching speeds on the punch bag and on his assitant then invites guests to have a go. The routine is completely tailorable to your request and can includes Q&As, push up competitions, it can include branding  on his clothing and on banners.

To book this exciting activity, contact our entertainment specilialists today.