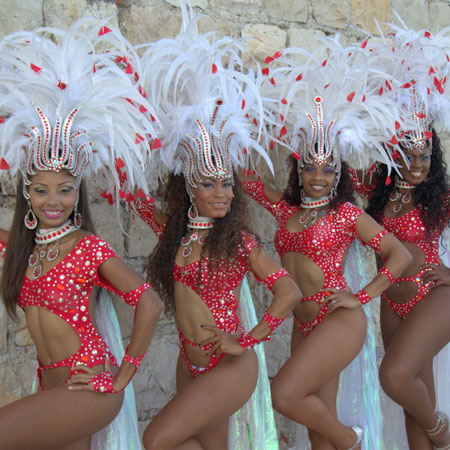 This Nice based Brazilian Entertainment group offers shows with the theme of Brazil for corporate events and private functions (marriages, gala nights, anniversaries, conferences, parades).  They organize shows in the style of the Rio de Janeiro carnival, with professional dancers dressed in costumes that come straight from Brazil. They also have tropical rhythms from Salvador de Bahia.

The group performs folkloristic dance and rhythms from Brazil including Samba, Maculélé, Frevo, Afro-Brazilian dances, Lambada and Capoeira.  The show includes renowned artists and music groups who have participated in the global popularization of Afro-Brazilian culture.

For the Brazilian dance shows only: the show is accompanied by music from CD, comprises between 1 to 10 artists, the duration of the show is between 10 minutes and 3 hours in various acts (destaque, mulatas, baianas, lambada, orixas, frevo, axé). At the end of each act they can do an participatory interaction with the audience.

For the acrobatic Capoeira shows only: the show uses music from CD, and at the end of each act they perform a participatory interaction with the audience.

Parade shows: a parade on the street with a percussion group playing the rhythm of Samba-Reggae and/or of "Batucada", accompanied by Samba dance girls and Capoeira acrobats.