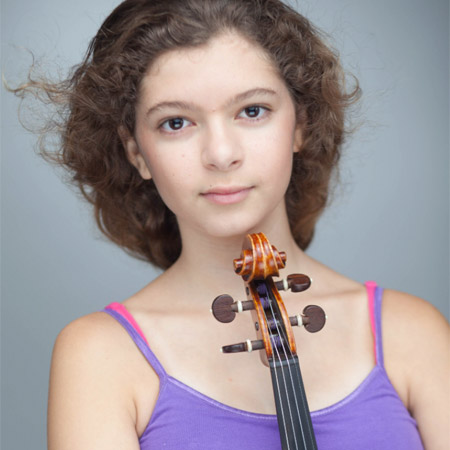 Biana is a 12 year old opera singer and virtuoso violinist based in Miami, Florida. Originally from Rego Park, New York, she started to sing at age 3 and play the violin at age 5, and by the age of 6 she had composed her first song and started to appear on big stages singing songs like the Italian: "Mama".

Since then, this immeasurably talented child performer has gone on to perform with huge stars such as Phil Collins and George Benson and is also often invited to perform at VIP private functions and events like Britweek with Romero Britto, Florida Grand Opera's production of "Tosca" and has even been invited to perform in Sorrento, Italy! A true child prodigy, talented young classical singer and impressive violinist, Biana can sing in 6 languages and play more than 200 pieces on the violin at college level.  She can perform both opera and broadway songs, and much more.

Biana has won many local singing contests such as “Young talent big Dreams” Junior performance competition in South Florida 2011, beating more than 400 contestants from 8 to 17 years old.  She has also won the “Talent Quest Kids” 2011 in Fort Lauderdale, Florida; New York Lyric Opera, Tri-Rail South Florida; and also impressed the judges on "America's Got Talent". In addition to competing in national and international contests, this talented child performer also does a lot of charity work for "Make A Wish Foundation", "The Children's Trust" and appears on a school tour where she teachers children about classical music and opera.