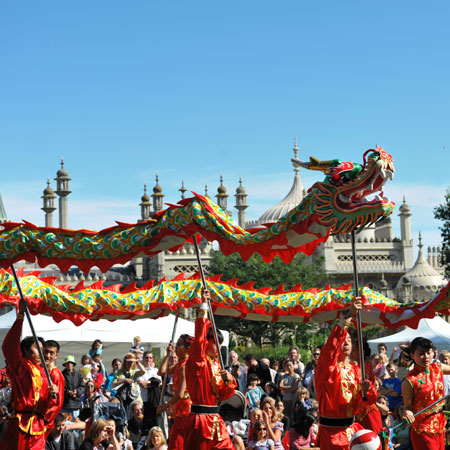 Traditional Chinese Circus Entertainer Ling performs solo and with her Troupe of professional, Chinese Circus performers, artistes and musicians who specialize in all traditional, Chinese acts and are available for:- Corporate Events; Film Premiers; Festivals, Fetes & Carnivals; Cruise Ships; Theatre & TV; Children's Parties and  Workshops; Cultural Diversity and Community Cohesion Events; Wedding Receptions and Anniversaries etc.  Formats can be cabaret or show-style; greeting; mix & mingle; close-up; workshop; formal or informal; or a combination of any, or all, of these.  We have lots of experience and can design a programme to fit your event and your budget.

These acts stand on their own or can be combined into rehearsed routines in an exciting programme of Oriental entertainment.  Many of these acts are unique and really have the 'WOW' factor.  Formats can be cabaret or show-style; greeting; mix & mingle; close-up; workshop; formal or informal.

Based in the UK for the past 10 years, Ling and her Troupe have travelled extensively in the UK; Europe & The Middle East in their work.  Her troupe performed on the red carpet for the Leicester Square UK premiere of the new blockbuster film Kung Fu Panda. Members of the Troupe have featured doing lion dance on the CBeebies show Tikkabilla and Ling has been on the same show performing foot-juggling and also in The Slammer; she also appeared in the Martin Scorsese film Gangs of New York.

For three consecutive years they have provided the Chinese entertainment at the Official Chinese New Year Reception at the Foreign Office. She has performed several times for repeat bookings in Variety Theatre in The Good Old Days and in Germany at GOP Variety Theatres.  Of course 2008 was the Year of the Beijing Olympics and they were at the forefront of many of the linked events held in the UK including the Olympic Torch Relay and Flag handover ceremonies etc.

To find out more, get in touch with our specialist team in-house of Entertainment Experts.