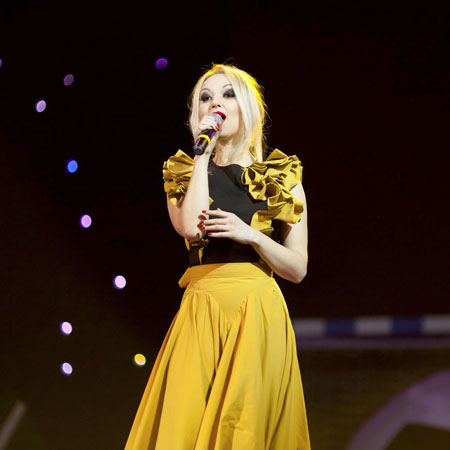 REASONS TO BOOK
Stunning Ukrainian singer with a beautiful soprano voice
Combines classical music of past centuries and pop
Performs regularly at prestigious events throughout Europe
Named as one of the Most Beautiful Ukrainian women by “Viva” magazine
Based in Kiev, Ukraine & available to perform at events worldwide
Live Music and DJ, Classical Vocals

In 2012, Arina presented her first single and the video “Ti Amero”, which was regularly played on many British Music TV channels. In April 2012 the singer was invited to the “Vienna Ball ” in Kazakhstan, where she performed on the same stage with Lara Fabian. Later, Arina was the one to open the “Vienna Opera Ball ” in Russia and the “Christmas Ball” in Spain. Arina has often performed at prestigious ceremonies in Germany, Italy, Spain, Russia and Ukraine.

Arina’s repertoire is based on classical compositions. The unique sound of these compositions is one of the artist’s main features. Beautiful appearance, original scenic characters and unique musical material – all this makes Arina a sensual and much loved artist.

Arina can often be seen on the front page of different magazines (<>, <> ...), she has taken part in photo sessions for magazines like “Viva”, “Story”, “Glianec”. In 2011 Arina was chosen as one of the Most Beautiful Ukrainian women, according to the “Viva” magazine.