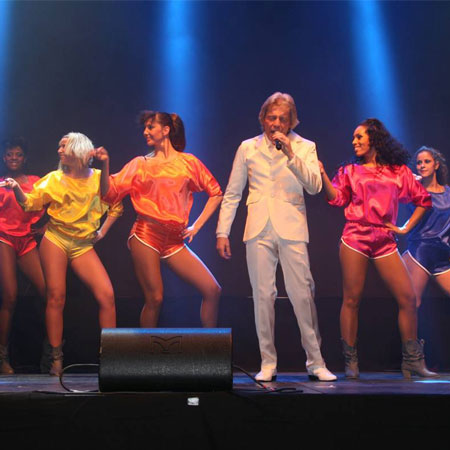 A tribute to the popular French pop singer Claude François, also known as Cloclo, our fantastic Claude François impersonator has an uncanny vocal resemblance to the singer. Available to book as a Claude François tribute and Cloclo tribute, this French singer will be a fun addition to your event.

Our professional French singer has been performing with bands and as a solo artist since the young age of 14, releasing his first single in 1992 which was incredibly well received and dominated the top of the French charts for eight consecutive weeks. It was clear from the beginning of his career as a singer that his vocals shared an uncanny resemblance to those of the late Claude François and now in the later years of his career, our impressive French vocalist has put together a fantastic Claude François tribute show that really pays homage to the star’s entire repertoire.

Claude François was a French pop singer, songwriter and dancer who found fame in the early 1960s with the release of a French cover version of a Everly Brothers song which sold close to two million copies, making him an overnight star.

Bringing to life the repertoire of the famous French pop singer, our Cloclo tribute and Claude François impersonator treats audiences to song after song taken directly from Claude François’ biggest hits. Performing with all the charisma and personality of the singer that he pays tribute too, our French singer offers an authentic Claude François tribute complete with costume changes and a troupe of stunning professional dancers performing slick choreographed routines.

Able to tailor the scale of the tribute show to suit each individual event, book our Claude François tribute show for concerts, festivals, corporate events, and more through out France and the world.

If you’d like to book our Claude François impersonator for your event or to find out more about how his performance could work at your event, get in contact with our experienced entertainment coordinators.