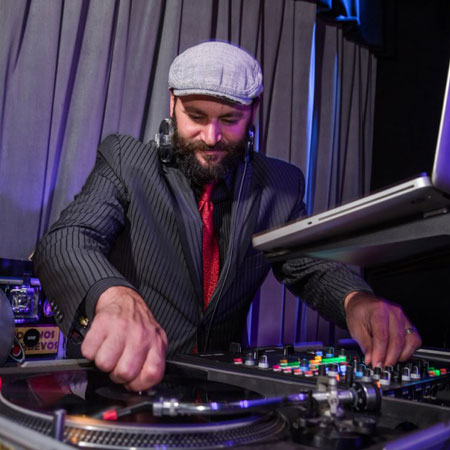 REASONS TO BOOK
Extremely talented emcee and DJ, with the ability to work any crowd
He is an encyclopedia of musical knowledge who guarantees to entertain!
Has performed for Sharon Stone, Barry Bonds, Ellen Degeneres, MTV and more
Mixes RnB and hip hop; Club, Pop, Rock, Lounge and much, much more!
Based in San Francisco and available to perform at events worldwide
DJs and VJs, Live Music and DJ

With almost two decades of mixing under his belt, our Club DJ is the consummate professional.

A skilled emcee and DJ, many clients have entrusted him to present awards, warm up the crowd and introduce other bands/acts. He has performed at literally thousands of events, including private and corporate parties as well as in the local and not so local club scene; his years of experience have given him a sixth sense about what works best for each event and he knows exactly how to work a crowd.

Never failing to exceed the expectation of his clients, his incredible skills in adapting to the dance scene of each event is second to none. Versatility coupled with one of the largest libraries of music separate him from all other DJs!

From RnB to hip hop, Club, Pop, Rock, Lounge and more, he can adapt his set lists according to events and audiences. With an impeccable list of references, he is an encyclopedia of musical knowledge that guarantees to provide expertly chosen musical mixes to satisfy every crowd.

In high demand at events internationally this Club DJ has DJ’d for the likes of Sharon Stone, Barry Bonds, Ellen Degeneres, MTV, UPN, QTV as well as spinning at after parties for Earth, Wind & Fire, Red Hot Chilly Peppers, Smashmouth, Elton John, Chris Isaak, English Beat, Men at Work and many others. While Emceeing certain parties he has had the honor of introducing Ella Fitzgerald, Tower of Power, and The E Street Band, to name a few.

Always looking forward to his next musical challenge, Club DJ awaits the opportunity to bring out the best in dance crowds.

Whatever your event - he delivers! Contact us today for more information.

" Club DJ played our wedding last week, and in what seems like 15 minutes into the set the entire party was up dancing. We had multiple people come up to tell us "The DJ is fantastic!" in the midst of congratulating us on our wedding. Friends told me they got his card as well.He was great with our musical requests, and he played a great selection around those songs. He was also a wonderful MC keeping the toasts and the guests moving.Your party will have a great time with Club DJ. "

" He was also our wedding MC of the evening, a task that he was more than well qualified for. He smoothed over the transitions for speeches, toasts, and introducing our dance. He also kept an eye on the Giants score throughout the night, so our guests interested in the NLCS were happy, too! "