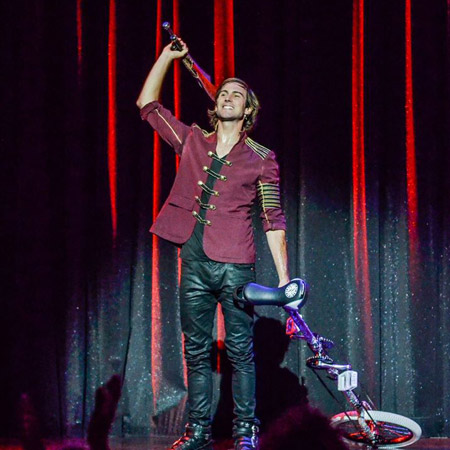 REASONS TO BOOK
Juggling act engages with the audience from start to finish for a hilarious juggling and comedy skit.
Variety act can perform as a Fire Juggler, LED Juggler, and Sword Juggler. A high-risk performance that's unforgettable.
A hilarious Comedy Artist that will put on a Comedy Act that's interactive, fun and gut busting.
Comedian and Juggler has previously performed on Disney, Carnival, Princess, and Royal Cruise Lines.
Variety performer is based in New York City and available to hire for events worldwide.
Comedy Act, Jugglers and Diablo, Circus Entertainment, Juggling and Diablo Act, Cabaret and Stage Shows, Speciality and Novelty Acts, Walkabout Entertainment, Circus Shows

Hire juggling act for the ultimate comedy act. Performing as a fire juggler, LED juggler and sword juggler alongside a hilarious comedy skit this juggling artist is one of a kind. Comedy artist is based in New York and available to hire for events worldwide.

Providing an interactive experience for mature audiences, this one-man juggling act will truly show you the risk behind his talent, all while cracking a joke or two about these very dangers.

Fire juggling, LED juggling, and sword juggling, our comedy act is bound to get amazing reception as soon as he steps foot on stage. Your event can expect a sea of laughs while our talent showcases his seasoned juggling chops.

Our comedic juggler has won awards for his craft and has even appeared on TV multiple times, further showing he's one of the best at what he does. When our act takes to the stage, your guests won't find it hard to take notice of his extreme yet hilarious on stage antics, it's truly something to be marvelled.

Scarlett Entertainment's comedic genius has taken his heated and gut busting act to various stages across the globe including; Disney Cruise Lines, Carnival Cruise Lines, and Royal Cruise Lines to name just a few of the corporate stages this talented juggling act has performed on.

His highly personalized jokes are accurately improvised and will become interactive throughout his performance, everyone is a target when our talent is looking to grab a laugh or on stage help that will bring this loveable performance to greater heights. Your guests won't be forgetting this performance anytime soon.

Scarlett Entertainment is home to amazing comedy acts and juggling shows, always striving to bring one of a kind acts to your corporate events, promotional events, festivals, television appearances, trade shows, and theater performances. For more information on how you can book our fabulous Comedian & Juggler in New York City and worldwide you'll want to get into contact with on of our outstanding team members who will help you book our talent for your next gathering. Why settle for less when you can have everyone laughing up a storm?