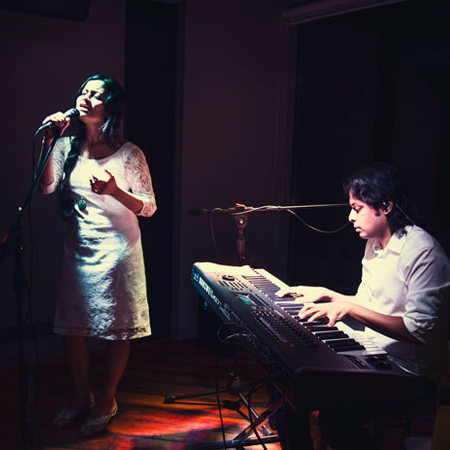 We know that finding the right live music as your event entertainment can be quite tricky especially when looking for and original non covers band. At Scarlett Entertainment we have a fascinating and hugely talented event band from New Delhi. With two albums of original material under their belts and many great reviews this contemporary Indian band promises to deliver high quality event entertainment.

These live performers have mastered a contemporary style of Indian music mixing Hindustani classical, pop, jazz, cinematic soundscapes and electronic music. Lyrics are sung in both English and Hindi. The musical style is classy and elegant, of a really high standard and guaranteed to liven the mood of your event whilst impressing your guests.

The nature of this live music makes it suitable for a wide range of events. Whether your looking for sophisticated entrance or background music for a dinner party, ceremony or product launch or to need the best event entertainment to get your party going with people on the dance floor, this live band will do that for you.

The live band originally began as a duo and are fully capable of providing an evening’s entertainment stripped down as a two-piece act. Alternatively, with the addition of a drummer and bass player, they come as a four-piece event band. A versatile act that can cater for your needs by adapting their line-up to suit your event. From the peaceful and eloquent two-piece to a more upbeat and lively full band performance.

This stunning live band have played high-profile slots at festivals across India, including Chandigarh Jazz Festival, DIY Festival, Friends Of Music and Fete de la Musique. In 2015, they were chosen as the 1st runners up of the Sennheiser top 50 competition and won the opportunity to record with one of Bollywood’s top production studios. They have also featured on Kappa TV,  a Malayalam speciality music television channel from the Mathrubhumi group with programs like Music Mojo. They have opened for the likes of Anoushka Shankar and Ranjit Barot and have played their music with Karsh Kale (NY) and Benny Dayal on the main stage at NH7 weekender.

Get in touch with one of our team at Scarlett Entertainment and speak to them about booking this contemporary Indian band for you event or party.