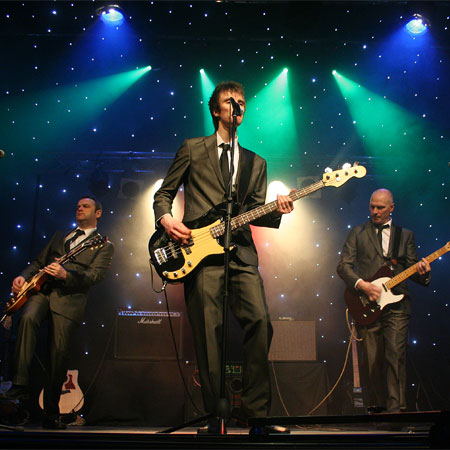 REASONS TO BOOK
Will make sure you & your guests have a night to remember
Three highly experienced, professional musicians
Eclectic repertoire includes something for everyone
Specialise in providing the perfect entertainment for weddings
Based in Scotland & available to perform at events worldwide
Cover Bands, Live Music and DJ

One of Scotland’s top professional weddings bands, this trio has a wealth of professional experience performing at countless weddings across the country. Also available to play at birthday parties and corporate events they are completely dedicated to creating the perfect entertainment for your event!

They possess an eclectic repertoire that really does have something to suit all musical tastes; from soul and classic ballads, to golden oldies, party songs from the 60s and 70s and Scottish dances! Including electric covers of Frank Sinatra, Amy Winehouse and everything in between they are guaranteed to have the dance floor packed from the first song to the last.

Equipped with state-of-the-art lighting and audio equipment they put on an incredible live performance - one that your guests will be talking about for a long time to come.

Able to adapt their performance to suit your specific requirements - whether you’re looking for a full-blown party experience or a more relaxed acoustic set - your event is in safe hands with three of Scotland’s finest!

" Just wanted to thank you guys again for playing at Nicole's 21st. She had a fabulous time and absolutely LOVED the band!! Everyone commented on how good you all were... not just performing but also how the whole set was geared around Nicole!! She was enthralled!! And thanks for wearing the hats!! "

" Please accept my thanks for playing at our daughter's wedding last weekend. You had been so helpful and friendly in the run up to the wedding and terrific on the night. So many people have commented on how much they enjoyed the evening. We couldn't have picked a better band! "

" I just wanted to say thank you so much for making our wedding day so special on 22nd June 2013. The first dance was exceptional and we were so grateful you learned this song so perfectly for us! Our guests all thought you were amazing one guest even asking if we had hired Paul Weller for the evening!! You made the whole process so easy nothing was too much effort and we cannot thank you enough!! We will be sure to recommend you in future!! "

" We'd like to thank you all for such a great night at our reception. You kept everyone up dancing all night and we all enjoyed you so much. "

" Graham and I just wanted to say thank you for playing at our wedding at Cameron House on the 7th. Everyone had such a great time. All the best to the three of you. "