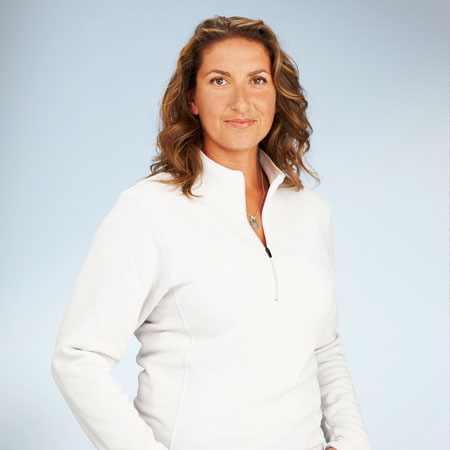 REASONS TO BOOK
Author and inspirational speaker record-breaking British Yachtswoman
Dee Caffari is the first woman in the world to sail non-stop around the world three times
Awarded an MBE in the Queen’s Birthday honours list
Appointed Honorary Commander in 2011 by the Royal Navy
Available to hire in the United Kingdom and Globally
Speakers and Hosts, Sports Speakers, After Dinner and Comedy Hosts, Celebrity Speakers, Leadership and Motivation Speakers

Yachtswoman Dee Caffari has sailed into the record books – three times. In May 2006, Dee became the first woman to circumnavigate the world solo ‘the wrong way’ (against the prevailing winds and currents). It is an extraordinary achievement. Only four men have ever managed to finish this gruelling route before: more people have walked on the moon. In recognition of her first world record, Dee was awarded an MBE in the Queen’s Birthday honours list.

Not one to stay in her comfort zone, Dee announced that she wanted to become the first woman to sail solo, non-stop around the world in both directions. Dee entered the highly competitive world of Open 60 racing and faced a daunting task. She was to compete against the best international sailors in a race held every four years ‘the right way’ around the world. After one of the most dramatic Vendée Globes ever known (2008/09) – it is not called ‘The Everest of the Seas’ for nothing - Dee crossed the finish line in February 2009 to international acclaim with a double world-first.

On completing the Barcelona World Race in April 2011 with her co-skipper Anna Corbella, Dee became the only woman on earth to have sailed non-stop around the world three times. Dee Caffari MBE has proven herself to be a yachtswoman of the highest calibre and many are amazed to learn that she only began her sailing career in 2000.

In early 2013, Dee Caffari MBE once again led the only all-female crew taking part in Sailing Arabia – The Tour (SATT). Established by Oman Sail, SATT is the first international sailing regatta to join the nations of the Gulf to race competitively around the region. For the 2013 Fastnet race, Dee joined an international crew on Oman Sail’s flagship ‘Oman Air Musandam’ winning the multihull class. (Sailing with her was Raya Al Habsi, one of the original women in the Oman Sail Women’s programme whom Dee has been coaching. Raya has been sailing for just three years).

In recognition of her service to the sea and Britain's maritime heritage as well as the charity ‘Toe in the Water’ which encourages injured service men and women to sail, Dee Caffari MBE was appointed by the Royal Navy as an Honorary Commander in 2011.

With a passion for sport and exercise, Dee’s keen interest in health and high performance stems from her roots as a teacher. A strong desire to face and overcome challenges has led Dee into adventures outside the sailing environment too. One such challenge was leading a female team over 6500km of rugged terrain in the Mark Webber Pure Tasmania Challenge. The focus was to raise money for cancer charities and Dee has since become the Patron for the charity Sail4Cancer. A love of the ocean and the British coastline has seen Dee become an Ambassador for the RYA Green Blue Campaign to help everyone reduce, re-use and recycle.

Without doubt, one of Britain’s most inspirational women, Dee Caffari MBE is now an acclaimed international speaker. She tells her highly motivational story with great humour and insight. Her autobiography ‘Against the Flow’ is available in French, Italian and German. Dee delivers something special. She can draw on her unique world-records in offshore sailing and the many challenges she has faced to achieve high performance in competitive, risky and tough environments. Dee shares her experience, insights and personal lessons learnt in an authentic, memorable and entertaining way.

Scarlett Entertainment has a wide range of Motivational Speakers to choose from.

If you would like to book our motivational, after dinner, keynote speaker Dee Caffari MBE, then please contact one of the team who will be happy to help you.

" Dee is a wonderful presenter… truly inspiring! The audience was spellbound. I don't believe we have ever had so many people ask so many questions after a presentation, but Dee took it all in her stride and graciously answered each one with humour and wit. "

" Inspiring, motivating, engaging, clear. Very powerful indeed. Many people approached Dee both after the conference and at the evening event to congratulate her and to say how inspired they had been. It exceeded our already high expectations. It delivered an impact that left people motivated and upbeat. The ‘wow’ factor of the conference! "

" Fantastic! A great story, a great speaker and a great inspiration. "

" The feedback was overwhelmingly positive and everyone was completely inspired and energised by your open, honest and refreshing style and of course the critical lessons around teamwork, motivation and leadership that apply to everyone of us in our executive roles. A truly impressive and humbling presentation that went down a storm. Thanks again for a wonderful session. "