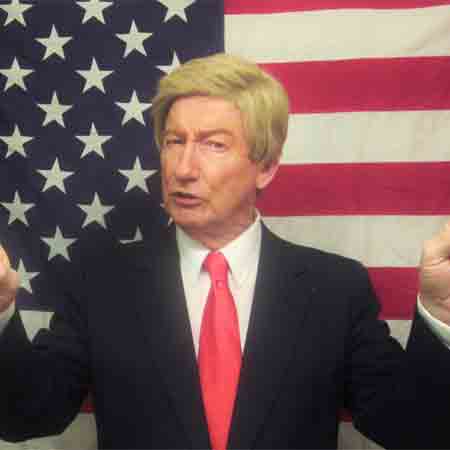 A professional actor and entertainer, our brilliant act has been impersonating Donald Trump – one of America’s most controversial figures – for over 12 years, following him as he starred in “The Apprentice” and “Celebrity Apprentice” and now as a presidential candidate!

Having accurately mastered Trump’s looks, mannerisms and persona, hire our Donald Trump impersonator if you want to add all the excitement and bravado that comes with this American business magnate to your event.

Hire our Donald Trump impersonator to meet and greet your guest as they arrive at your event, pose for photos, mix and mingle during the evening acting in character, entice passers-by to your trade show stand, host an ‘Apprentice’ style game show at your corporate event, or even appear as a Donald Trump lookalike in TV commercials and retail promotions.

This act can also appear as number of other celebrity figures including Clouseau and James Bond! Talk to one of our entertainment coordinators to find out more.