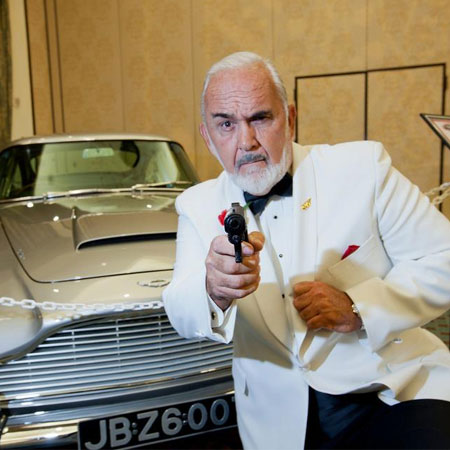 This lookalike's resemblance to the Hollywood legend has earned him the privilege to work alongside Sean as his Stand-in double. John has thrilled audiences with his appearances adding an elegance and sophistication expected from James Bond. Whether acting as Master of Ceremonies and recreating Sean's famous voice while handing out awards or interacting with VIPs, John's on stage ease and professionalism make every event exciting & memorable.

The Sean Connery Lookalike has been honoured by his peers, winning three Cloney awards and three Reel-Awards presented in Las Vegas. These awards are considered Oscars in the celebrity impersonator industry.

He has appeared on Jay Leno and Oprah Winfrey and performed in every major casino in Las Vegas as a James Bond impersonator.

" Just wanted you to know how wonderful everyone thought you where at both of are 007 James Bond customer appreciation events. In Denver and St Louis All of the attendees where so taken with your appearance. Many thought at first glance that Sean Connery was actually there. You did more then we ever expected with your meet and greetings then posing for photos. When you spoke using Sean’s voice it really made for special moments. Also during the on stage presentations you really made the evening with your James Bond skits and where so kind to include many of our VIP’s , they loved it.The ease at which you handled the onstage awards presentation was so professional. Thanks once again these where very important evenings for us and your elegance, sophistication and class really made the evenings spectacular and very memorable. Look forward to working with you in the future. "