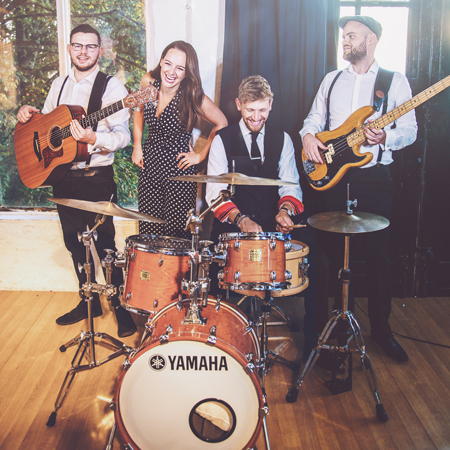 REASONS TO BOOK
High-calibre live event band with tailorable options to create the perfect live music for your event
Choices of duo right up to a five piece band with acoustic options and music genre preferences
Clients include Aston Martin, Henley, Microsoft, Unilever, The Shard, BMW, Virgin, IMG and many others
Suitable for all event types including corporate functions, wedding receptions and private parties
London function band is available throughout the UK and for events abroad
Acoustic Covers, Covers Singers and Duos, Live Music and DJ, Chill Out Music, Cover Bands

Able to cater for all kinds of live music needs, our brilliant Duo to Five Piece Live Band is an exceptional choice that creates the best impact at any occasion. This high-calibre tailorable event band is orientated around our fantastic female vocalist Victoria and her acoustic duo. With scalable options as an acoustic band up to a full live band and a variety of live music styles, the London function band is one of the most diverse.

The Duo to Five Piece Live Band has a fantastically diverse repertoire from which they can curate the best possible setlist to suit yours or your guests’ tastes. Depending on your event type and the atmosphere you wish to create, the tailorable event band lets you choose from a variety of popular music that is chilled out to mid-tempo to upbeat songs. They have a wide selection of pop performed in vintage jazz style plus blues and retro pop and soul. They also have a wonderful Christmas option too.

The London function band has a wealth of experience. As session musicians, they have performed on the likes of BBC Radio One Live Lounge and with artists such as Ellie Goulding and Jess Glynne. As an acoustic band, they have performed for HRH Prince Charles and have an impressive list of previous clients that includes Aston Martin, Henley, Microsoft, Unilever, BMW, Virgin and IMG.

Our tailorable event band is actually fantastic for any occasion; corporate function, wedding reception or private party. Their options as an acoustic band are great for more intimate events and they are even able to supply a battery operated PA system for tricky locations.

If you are interested in booking the versatile London function band for your event's live music, contact us to find out more.

" BMW were so happy with your sets and were really pleased with how the event went. They got great footfall throughout the event and are super happy. "

" They have an extensive song list that perfectly suited our music style as a couple so we were thrilled with our choice. "

" You exceeded our clients expectations – the big boss loved you guys and our client said that the acts this year were the highest standard we’ve ever had. The tone of your voice is really rather special! "

" “They played 3 delightful sets across the course of the day. They were also extremely professional and really nice to deal with. "