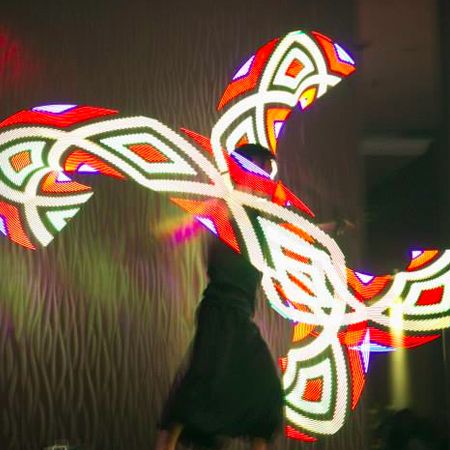 Danny is an award-winning professional fire and lights artist based in Southeast Asia. Armed with a commanding stage presence and unmatched showmanship in fire and Visual Poi, Danny is fast emerging as one of the hottest acts in the region!

Much like the evolution of life itself, the ELEMENTS act begins with the fabric of all reality - light. Danny opens the show with electrifying visual poi on stage. These one-of-a-kind LED wands morph into a dazzling array of designs with the changes in music. Currently one of the most highly sought-after acts in Asia due to its rarity and visual impact, definitely not to be missed!

The act takes a gentler flow as Danny introduces the elements of water and earth on stage.  Here, he creates a colourful illusion with water and sand. Sands of different colours are mixed in water which magically changes opacity, and once again separated into their individual colours. Part sand art, part magic, East-West fuses in this artistic piece.

Finally, to end the act and as a symbol of rapid modern industrialization and its double-edged effects on society, Danny performs his signature razor blade illusion act in this thrilling finale. He swallows solid steel razor blades and threads them on a string in his mouth to a heart stopping climax!