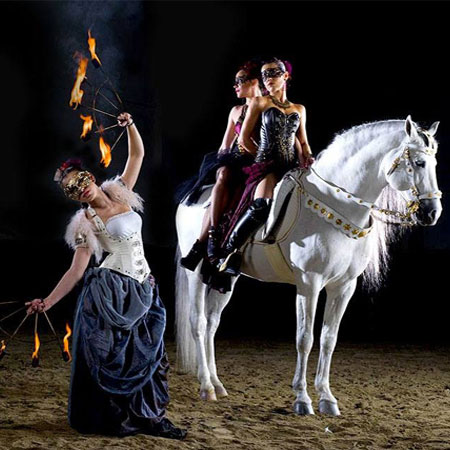 REASONS TO BOOK
Pride themselves on being the best Equestrian team in the country
A truly spectacular show combining horses, aerial art and fire
Won the Italian Cup for “Best Horse Act” in 2006
Historical or fantasy costumes for horses and riders add dramatic impact
Based in Milan and available to perform at events worldwide
Cabaret and Stage Shows, Unique Shows, Speciality and Novelty Acts, Animal Acts

Combining horses, aerial artistry and fire, Equestrian Show Italy pride themselves on being at the top of their game, and the best Equestrian team in the country.

Favouring Iberian horses, due to their greater aptitude, the performers incorporate exercises such as pirouette, passage, levade and pesade into every show.

With each innovative act, the group has already been invited to perform at many events such as the Fieracavalli gala show and the International Umbria Endurance Competition, held in honor of the Prince of Dubai.

In 2006, Equestrian show Italy won the Italian Cup for “Best Horse Act” with their performance “Amarcord”, homage to the great Federico Fellini.

Out Of the Box Video Mapping