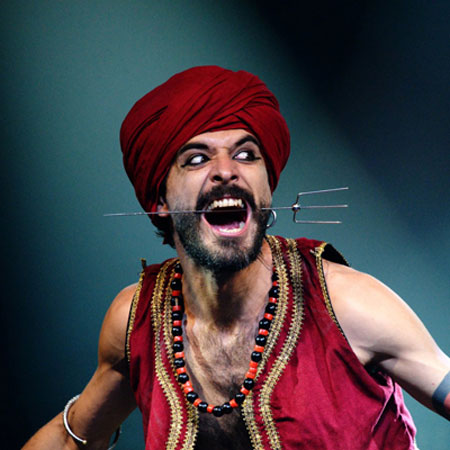 REASONS TO BOOK
A multi-disciplined sideshow style performer with a variety of jaw-dropping acts
Offers a variety of freakshow routines and human feats for the stage or as street entertainment
Shows can be in Spanish, English or completely silent, with or without audience participation
Over 10 years experience entertaining audiences all over the world
Based in Barcelona and available for events all over the world
Themed Entertainment, Unique Acts, Speciality and Novelty Acts, Bizarre and Unique Circus, Circus Entertainment, Arabian Nights

Themed like a character who has just leapt out of a fantasy story or Hollywood film, our Arabic circus performer is a visually striking, unforgettable character with a variety of jaw-dropping, edge-of-your-seat acts that amaze audiences of all ages. The Fakir Circus Show Spain isn’t for the faint hearted but you’ll be transfixed and amazed by what this Fakir performer can do.

The incredible versatile Fakir Circus Show can be booked as a stage show or as street entertainment. Either way, it is visually captivating and involved audience participation. The Arabic circus performer has a wide variety freakshow style routines and human feats such as sitting on beds of nails, walking on glass, fire eating, driving objects through his face, climbing a ladder of swords and much music more. He delivers all acts with good humour and a theatrical performance.

With over 10 years experience, this Arabic Circus Performer is now based in Barcelona and has been entertaining audiences all over the world. His shows have been seen in Swizterland, Italy, England, France, Portugal, Germany, Sweden, Belgium, Egypt, Nepal, India, Malaysia and Colombia. The Fakir Circus Show can be in English, Spanish or completely silent depending on audience type.

Fakir Circus Show Spain is a suitable form of entertainment for all audience types and all nationalities. Due to his striking appearance, the Arabic circus performer is extremely well suited to any event with an Arabic or Middle Eastern theme.

Contact our team at Scarlett Entertainment to book the Fakir Circus Show Spain for your event.