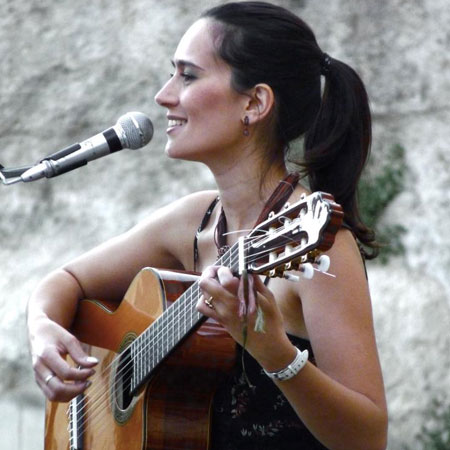 REASONS TO BOOK
Captivating female vocalist with a vast performing experience
Singer/ Guitarist with a huge repertoire of songs
Popular with restaurants, corporate events, weddings and private parties
Performs French and International songs and jazz standards
Based in France and available to perform at events worldwide
Live Music and DJ, Acoustic Covers

Looking for guitarist with a melodious female voice to enrich your event? Then look no further! Our Female Guitarist Karelle is the entertainment option for you. This experienced musician and singer has captivated several audiences all over France with her charm and talent and she’s ready to bring some of it to your upcoming celebration!

This captivating female vocalist has vast experience performing at restaurants, corporate events, weddings and private parties across France. You can check some of the clients she has performed for by clicking the tab above.

Her wide repertoire of songs makes her cover songs show the ideal option for different type of events and audiences. She can play French and international songs, and can sing in both French and English.

From Edith Piaf, to the well remembered ‘Over the rainbow’ from the Wizard of Oz’s soundtrack until the more modern sounds brought by U2 in the 90s, this talented female guitarist can play it all.

Take guests at your wedding, fancy garden party or private evening party to a tour through music history with this cover songs show.

Our female guitar player offers a huge repertoire of French songs and is very happy to put together a set list to suit the occasion and learn new songs with notice.

As well as performing as a solo singer and guitarist, she can also perform as a duo, trio, or in a larger band line-up. You can watch some of her performances alongside other musicians in the videos above and see for yourself this captivating female vocalist and guitarist’s talent and charisma.

Booking a guitarist/singer for your wedding, evening dinner and or private party has never been so easy!

Make your enquiry today about Female Guitarist Karelle by contacting our in-house team of entertainment coordinators.