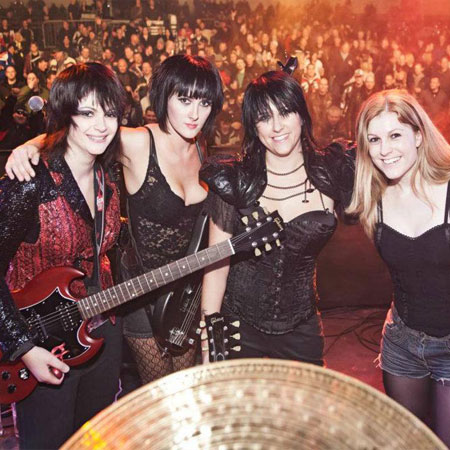 REASONS TO BOOK
All female rock band performs hard, grunge, gothic, and slow rock
Have made a huge impression among Rock legends in the business
Produce a tight mix of pop rock and heavy rock tunes
Previous clients include Harley Davidson, Chicago Rock Cafe, Center Parcs
Based in London and available to perform at events worldwide
All Female Bands, Live Music and DJ

This Female Pop Rock Band are based in London and are fast emerging as favourite among rock enthusiasts in and around UK. Since emerging into the rock scene in 2011, they have made such an impression among legends in the business that their newest single was produced by no less than Led Zeppelin's legendary producer Stuart Epps, as well as Oasis and Elton John!

Consisting of four highly talented and passionate musicians, the band produces a tight mix of rock pop as well as some heavy metal, grunge, gothic, and slow rock ballads.

Due to their success, the girls have already seen a number of concert tours around Europe and the world, playing in the USA, Caribbean, Austria, Rome, Slovakia, Germany, Holland, and New Zealand. Their music has taken them to play at the London Astoria, cafe De Paris, and O2 Indigo as well as in countless numbers of festivals around the world.

Today, when the band is not busy planning for the release of another album, they receive invites to perform at corporate events, hotel shows, cafes, clubs, and even private events and parties. What makes these girls thrive in an otherwise male-dominated genre? Simple - they look and sound great on stage!