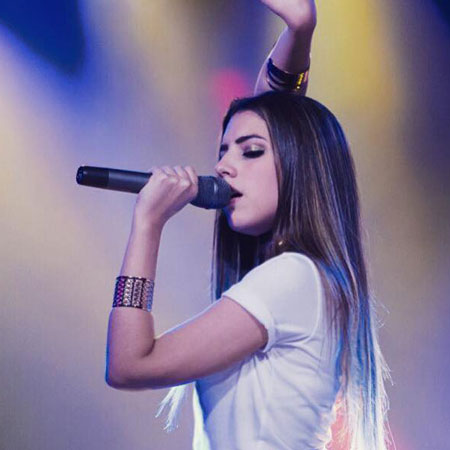 REASONS TO BOOK
Professionally trained Colombian singer and songwriter
Stared in musicals such as Mamma Mia, Rock of Ages and High School Musical
Female vocalist sings fluently in three languages - English, Italian and Spanish
This female solo singer was the opening act for Ricky Martin at the Emirates Airline Dubai Jazz Festival
Based in the United Arab Emirates and available for bookings across the Middle East
Covers Singers and Duos, Live Music and DJ

This female solo singer credits the beginning of her career to her musical childhood. Growing up, she was immersed in the art of music, joining the local choir and at the age of eleven, she began taking piano and music production lessons. As she became more interested in the field of music, she began singing different music genres such as pop and R&B, which is her current preferred style. With her rising interest in music production and composition, this young vocalist produced her own original songs, which won her a chance to record a music composition at the prestigious Berklee College of Music in Boston.

Winner of several awards, this female vocalist has been the main character of many stage productions, starring in musicals such as Mamma Mia, Rock of Ages and High School Musical counting with an estimated attendance of 4,000 people per musical.

Our female solo singer participated in The Voice Colombia (Teen), a reality TV singing competition to identify talented vocalists where she finished eighth out of ten-thousand participants. Her later success came when she was selected to be the opening act for Ricky Martin at the Emirates Airline Dubai Jazz festival. Performing fourteen songs, this Colombian singer was given the opportunity to perform live music for the first hour of the concert in front of a large audience.

Our talented vocalist sings fluently in English, Italian and Spanish.

Scarlett Entertainment offers a variety of live music entertainment options for events in the United Arab Emirates and all over the world.

If you are interested in booking this talented female solo singer for your live music please get in touch with our Entertainment Experts today. Our team at Scarlett Entertainment will be more than happy to answer all your questions and guide you through the booking process.