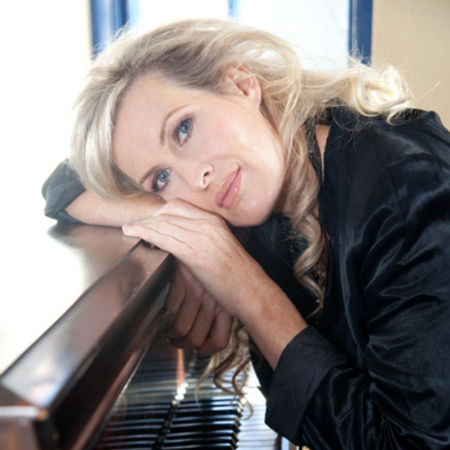 Soulful interpretations of classy jazz standards, poetic originals, charming twists on contemporary songs and a voice that moves from warm and silky-smooth to edgy, raw dynamics are elements that combine to make Bonnie a captivating performer.

Bonnie’s talent as a pianist, and her depth of creativity and devotion to perfecting her skills as a vocalist and composer, enables her to attract some of Australia’s finest musicians for both recordings and live performances.  Her four CDs feature a “who’s who” of the Australian jazz scene, including James Morrison, James Muller, Graham Jesse, Alister Spence, Miroslav Bukovsky, Nicholas McBride and Phil Stack.

Possessing a voice of exceptional nuance, agility and immaculate pitch, Bonnie is able to imbue whatever she chooses to sing with her special warmth and wit, moving easily through swing, Latin-influenced jazz and funky moods.

Classically trained with choral and orchestral experience, she initially discovered jazz through listening to the sounds of the legendary composer/musician A.C. Jobim and it’s this foundation that continues to inform her performances and song-writing.

Sydney based and New Zealander by birth, Bonnie’s elegant artistry reflects an international existence.  She has lived for extended periods in Germany, Portugal, America (NYC), Italy and Asia.  She has also travelled extensively with her work, performing in Sweden, Singapore, Spain, Malaysia, Korea, Mongolia, Hong Kong and repeatedly in Japan.  In 2012, Bonnie was featured at the Manly, Thredbo and Noosa Jazz Festivals in Australia, the Giant Steppes of Jazz, Mongolia, and at Tokyo TUC in Japan.

Currently, Bonnie is usually heard in Quartet or Quintet context, but apart from performing solo as a pianist/vocalist, she offers you an assortment of ensembles, including Piano/Vocal with Cello, Guitar and Vocal, Piano/Vocal with Bass and Trio to Sextet line-ups that generously showcase the pride of regional jazz talent.

" Australian jazz chanteuse Bonnie is one of a covey of new female jazz vocalists bringing a fresh perspective to the jazz culture. She joins the likes of America’s Norah Jones, Britain’s Claire Martin and Sweden’s Linda Pettersson in bringing a soft, sweet, sultry, soulful synapse to the jazz idiom. "

" This is an experienced singer...and it’s the Diana Krall-like combination of innocence and sexy womanliness somewhere in the timbre of the voice that lets you know. "

" Bonnie’s marvelous voice is the key to why the CD succeeds so completely. Her skills honed by years of performing, the vocal trademarks are all there; the smoky timbre, the pitch perfect accuracy, the lovely way she controls the lower register. "