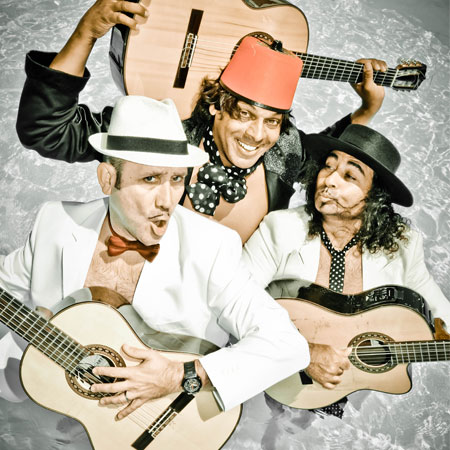 Our comedy flamenco trio present flamenco as you’ve never seen it before!

This hilarious Spanish guitar trio offer up a fantastic flamenco show packed full with virtuoso Spanish guitar playing, flamboyant flamenco dancing, daredevil juggling with ping pong balls and a healthy dose of slapstick comedy! There won’t be a dry eye in the room after they’ve finished with their audience.

Offering a unique form of Spanish themed entertainment with a comedy twist, our fantastic comedy flamenco trio have wowed audiences around the world. They have appeared on international shows such as ‘The Johanthan Ross Show’’, Late Night With Jools Holland’ and ‘Just For Laughs’, they’ve also appeared at the Edinburgh Fringe Festival where they were awarded ‘Best Newcomer’.

Their critically acclaimed flamenco show brings together years of experience as professional entertainers and musicians. In addition to fast-paced comedy, amazing Spanish guitar playing, and ping pong ball juggling, our Spanish guitar show can also pull out all the stops and add in gypsy stick dance, Palmas and Cajon drums!

Top Tip
Our Spanish comedy show can be tailored to meet your needs, whether you’re looking for a longer or shorter performance length, specific songs or juggling tricks to be included. Talk to one of our entertainment coordinators to find out more.