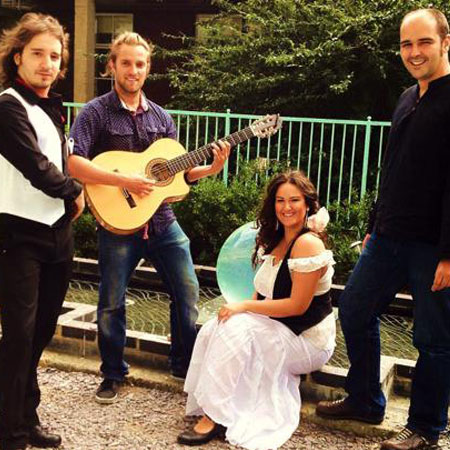 REASONS TO BOOK
A truly exceptional standard of live flamenco performance
The show comprises of internationally recognised talents
Has worked teaching with celebrities such as Pippa Middleton
They immerse the audience in Spanish culture and dazzling costumes
Based in London and available to perform at events worldwide
Flamenco Dancers, Spanish And Flamenco, World and Cultural Acts, Dancers

They immerse the audience in Spanish culture with the dazzling choice of costumes, the powerful guitar sound, and the rhythm of the of footwork and castanets. This talented musical line-up comes in configurations of between 2 and 10 members, and is the ideal choice for themed parties, corporate events and exhibitions.

The talented Flamenco dancers have been evolving professionally over the last decade, and are now one of the leaders in the field, performing in a variety of venues in the U.K. and Spain such as the Ronnie Scott’s Jazz Club London, the Royal Festival Hall in London, the Blue Marlin in Ibiza, Spain and the celebrated Corral de la Moreria based in Madrid.

The group have performed in such far-flung destinations as Casablanca and Dubai, where in 2012 it was a star act in the Global Village Festival Dubai, and was introduced to thousands of listeners around the country by flamenco artists Jesus and Ignacio via Virgin Radio.

Now based in London, they deliver a truly exceptional standard of live performance.

" Flamenco Performance London has been organising the Spanish Night in our restaurant "Trangallan" once a week since August 2012 bringing a variety of flamenco musicians and dancers of a high quality and professionalism. "

" I wanted to give a birthday surprise to my boyfriend who loves flamenco dance so I decided to hire a male and female flamenco dancers to teach him some steeps in a dance studio in London. They were very professional organising everything, my boyfriend was a bit embarrassed at the beginning but Jesus and Lourdes were very friendly and charismatic to us, so after few minutes even myself danced with them. It was so excited. He enjoyed a lot! I was completely satisfied. "

" I contacted Flamenco Performance London regarding a Spanish Guitarist for our weeding in Ibiza, I requested the song "somewhere over the rainbow" if possible when I walked down the aisle.My husband and me were really surprised as Jorge played that song, He was very punctual, professional and an awesome musician. "