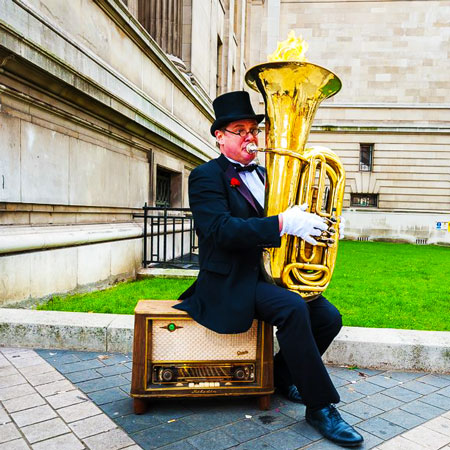 REASONS TO BOOK
The flaming tuba player is a totally unique act you will have never seen before
Quirky vintage musician blasts flames from his tuba as plays along to old-fashioned jazz
Great for welcoming performances, weddings, receptions, vintage events and more
Has performed all over Europe and appeared on the Paul O’Grady Show
Based in London and available for events worldwide
Themed Entertainment, Live Music and DJ, Brass Bands, 1920s and Vintage Music, Speciality and Novelty Acts, Unique Acts, Walkabout Entertainment, Circus Entertainment, Fire Acts, Fire and Angle Grinding, Specialist Musicians, 1920s,Great Gatsby and Prohibition, Walkabout Musical Acts

You don’t get much more of a unique act than our Flaming Tuba Gentleman. This quirky and exquisitely presented vintage musician is guaranteed to blow your guests away with a conceptual visual and sonic performance like no other. This is probably the hottest act you didn’t know you wanted so much.

Our Flaming Tuba Gentleman is a vintage musician both in appearance and in personality, he likes nothing more than putting a smile on people’s faces with his unique act. Originally from Poland, he has been busking and performing at events all over Europe from Warsaw to Berlin, Prague to Vienna. Now based in London he is available for welcoming performances, weddings, receptions, vintage fairs, and any event that requires a unique act as a focal point.

Perched upon his retro wireless radio, the Flaming Tuba Gentleman plays along to old-fashioned 1920s to wartime-era Jazz and swing tunes. He has a vast repertoire of songs that will keep your guests entertained for a long time. As the vintage musician plays his magnificent brass instrument, he billows out puffy flames which as just simply mesmerising.

As you would expect, this unusual brass player quicky grabs peoples attention and becomes a much talked about feature of any event. He has gained a lot of recognition for his one of a kind act and even appeared on the Paul O’Grady Show playing a cover of a pop band song.

To book this flaming tuba player for your event, please contact our team online or give us a call and we promise they won't be giving you a load of hot air, just the facts you need to know.