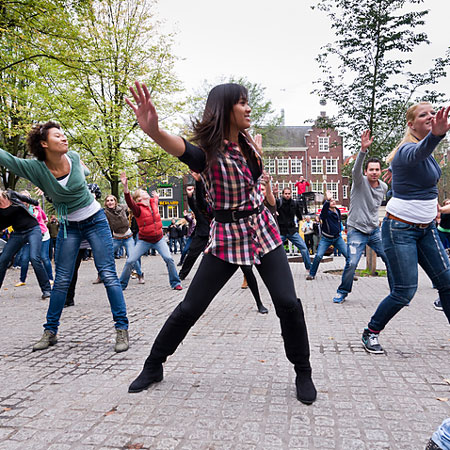 REASONS TO BOOK
Watch your guests faces light up with our incredible surprise dancers and flash mob act
Flash mob performers spring out of the crowd and start dancing away to hit tracks from Bruno Mars to Michael Jackson
Our flash mob Amsterdam also offer workshops so you can learn the routines and join in the fun at your event
Great for weddings, proposals, PR stunts, corporate events and any occasion that wants to pump a bit of life and excitement into their event
Based in Amsterdam and available for worldwide bookings
Walkabout Entertainment, Dancers, Street Theatre, Flash Mob Dancers

Shock your guests with our amazing surprise dancers! Flash Mob Amsterdam pop out of the crowd to perform exciting choreography that instantly draws attention and stops people in their tracks. A fantastically fun dance mob act that is guaranteed to surprise your guests is the ultimate entertainment as our flash mob performers dance to upbeat and catchy tracks from Bruno Mars to Michael Jackson.

Flash Mob Amsterdam is a fabulous dance mob who inject life into every event as they appear in their numbers, performing fantastic choreography in sync with one another in a perfectly rehearsed routine.Our dance mob also offer workshops where you can learn the dance routines and join in the fun at your event! Great for getting everyone up and dancing.

A brilliant addition to weddings, corporate events, PR stunts in the street, proposals, private parties and any occasion that desires a fun and vibrant dance performance act that will surprise your guests for all the right reasons!

With several types of dance style, and variation with music choice and number of performers this flash mob Amsterdam can provide the perfect event entertainment that is tailored to suit your every needs.

To book our incredible dance mob or for more information, contact our Entertainment Specialists today!