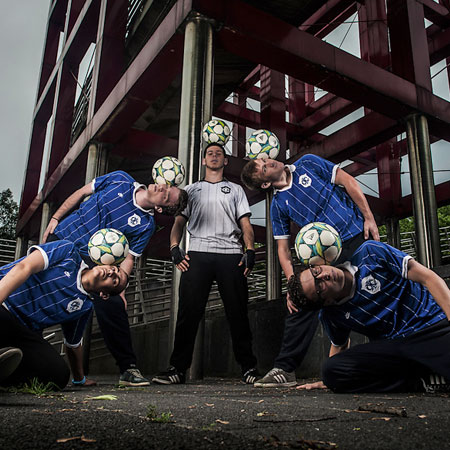 Composed of four players and a goalkeeper, this original team is so far the most successful in the world of Freestyle Football. The freestylers play football in a new way. Individually on stage or all together on stage they perform breath-taking feats with one or more footballs. Their goal: to push the boundaries of their discipline in performance, art and innovation.

The titles accumulated by the team include:

The group have accumulated millions of views on the internet and have had attention drawn on them by numerous medias such as RMC, BBC, Sky sports, France 2, Vox, FHM, Respect Mag and many TV channels : canal +, D8, France 2, France 3, France 5, France Ô and also Canal J. The team has also been a finalist on the TV show “Got Talent” in Spain.  They also shared a few juggles with football stars such as Didier Drogba, Lionel Messi and also in an adidas commercial with Mr Zidane.