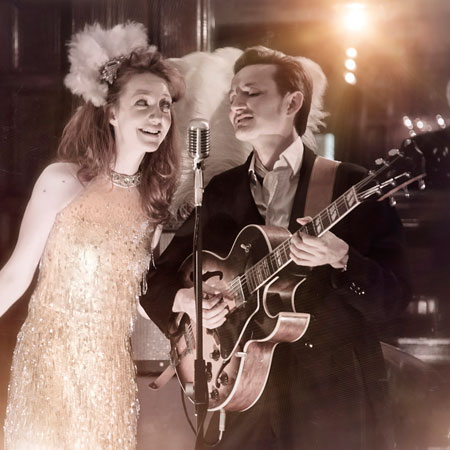 This French Swing Orchestra perform the gorgeous ballroom dance music that was played in Europe, Cuba, Russia and the USA during the 1920's to the early 1950's. The orchestra, made of nothing but internationally renown musicians from France, Great Britain and Jamaica is rapidly establishing a fearsome reputation for its truly amazing live performance with dancers, lovers & listeners.

The orchestra was formed in 2009 and it was immediately a hit on London's cabaret and vintage speak-easy scene. Since then the orchestra have played all over the UK and Europe to critical acclaim, fulfilling their vision of a contemporary orchestra who command the dance floor like the master entertainers of the 1920s, 30s and 40s.

The French Swing Band plays many private parties and corporate events where you couldn't come, but also many public concerts; cabarets, speakeasy, club nights and festivals were you should definitely go.  They can play for you as a trio, quartet, quintet, sextet, septet or more if required.

" ...this 36-year-old musician who regularly attracts more than 250 dapper vintage enthusiasts to his midweek swing nights. "

" ...If you missed their show, you missed a treat. - We’d all be much happier if the Orchestra's music was the soundtrack to our lives. "

" ...We don`t get enough of this kind of class act and excellent musicianship. "

" ...swinging fast … an authentic wall of sound … romantic and distinctly Parisian angle …quite striking and perfect, it all felt rather filmic ...Latin/swing dexterity ...the rhythms were tight and hot. THis Orchestra definitely reside within the cabaret end of jazz but their combined individual skill almost makes them a crossover ensemble. "