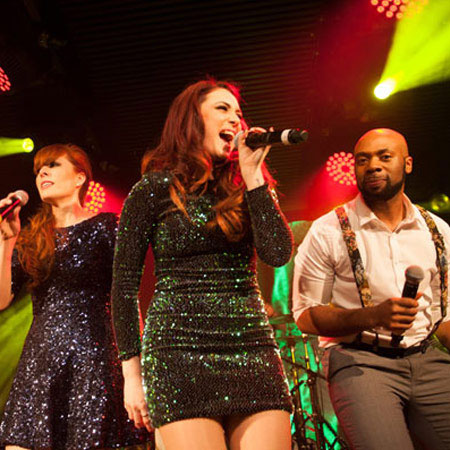 REASONS TO BOOK
Masters of their craft, they are one of the UK’s Leading Party Bands
Hired throughout the UK & internationally for just about any occasion
Renowned for their outstanding talent & high-octane performances
Have worked with Mark Ronson, Jessie J, Taio Cruz, Katy B...
Based in London & available to perform at events worldwide
Cover Bands, Live Music and DJ

Funk, Soul & Disco Band are a transatlantic collective of some of London’s most exciting and in demand session musicians. Experts in entertainment, the band have been burning up dance floors, and astounding audiences across the UK since 2008 with their unique renditions of all the greatest Funk, Soul, Disco & Pop Classics.

Now in demand at over 100 events per year worldwide, the band have become renowned for their outstanding talent and high-octane performances, and as a result, are now one of the busiest and most highly acclaimed groups in the events entertainment industry today.

With their roots in some of the UK’s finest conservatoires, including The Royal Academy of Music, LCoM & Trinity Laban; all members of The Funk, Soul and Disco Band now balance a busy full-time career performing with the band, alongside collectively working with some of the biggest names in the UK Top 40, The West End and on Television.

" The feedback I have received today from our troops has been unbelievable! Definitely the best event we have been involved with! "

" Thank you so much for playing at our wedding at Wroxall Abbey Warwickshire on friday 22nd everyone loved you, you were absolutely fantastic, thank you for playing our first dance it was awesome! We will be recommending you to everyone we can, all the best for the future. "

" You guys were amazing! You played a huge part in making our wedding day fantastic! All night people were telling us how fantastic you were and what a good choice we had made! I wouldn't hesitate to recommend you to friends and family. The stage and the room also looked amazing! Thank you also for all your support pre wedding with the planning and thanks for your patience! With the warmest wishes. "