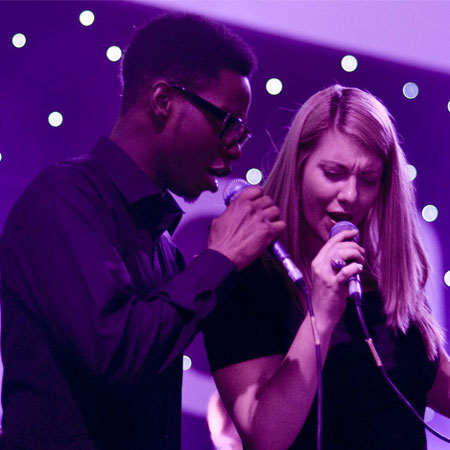 Not your typical wedding and party band, the group were formed in 2002 and consists of highly talented, professional musicians, all of whom are active on the London music scene and trained at top music colleges such as the Royal Academy and the Guildhall. Members of the band have worked with many well-known artists, including Jamie Cullum, Brian May, Tom Jones, Maceo Parker, Lee Ryan, Roy Ayres, Bonobo, the James Taylor Quartet, Dennis Rollins, Ola Onabule, John Dankworth, Cleo Laine, and many more.

Over the years they have performed at numerous weddings, parties, corporate functions, charity events and awards ceremonies. Recent clients have included Volkswagen, What HiFi?, Auto Sports, Canon, The Spinal Injuries Association, Barclays Bank, Shell, Direct Wines, The IVCA, and Dyson. Every song on their set list is carefully arranged, some with our own unique interpretations!

This, together with the standard of musicianship and the number of years for which they have been playing together is why they now have such a strong reputation as being one of the UK’s top wedding & party bands.

" Hearing you guys and how tight you were reminded me how good a live band can be for walk up stings. I'll certainly pass your name around when we next work on an awards night. "

" Gavin and I just wanted to say a huge thank you for all the wonderful music you provided throughout our wedding day. So many of our guests commented on the music and how talented you all are, and everyone was especially impressed by your vocalists. We could not have asked for a better band and will not hesitate to recommend you to anyone who asks! "

" We just wanted to say thank you so very much for playing at our wedding on the 9th! You were all fab, we really enjoyed it and I know there was lots of dancing! The whole day is a bit of a blur, but we loved it and are so grateful to you all for being there and playing your socks off! "