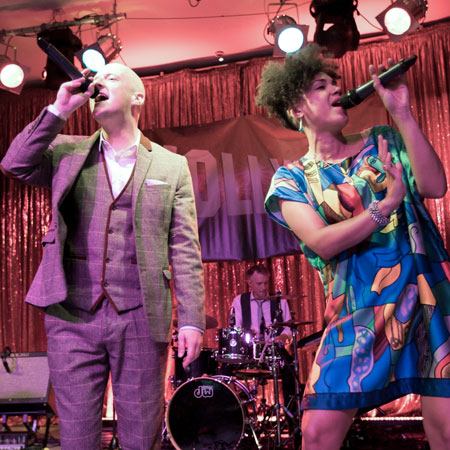 REASONS TO BOOK
Young and professional band are guaranteed to fill the dance floor
Extensive repertoire of classic hits from the 50s through to present day
Offer a variety of line up options to suit your requirements
Past clients include BMW, the AA, Glastonbury Festival
Based in the UK and available to perform at events worldwide
Live Music and DJ, Cover Bands

With dynamic and energetic live performances, this brilliant band are guaranteed to bring a fantastic atmosphere to your event, giving a unique twist to popular songs and delivering them with passion and vibrance.

Playing an extensive repertoire ranging from classic hits of the 50s and 60s by the likes of Elvis and The Beatles through to current chart toppers from artists such as Pharrell and Lady Gaga, this band guarantee an unforgettable occasion.

They offer male and female-led vocals, can perform as a 6-piece, 5-piece, 4-piece or even as a stripped-down acoustic outfit, and also offer a wide and varied jazz set and a DJ set, meaning there is something for every function. Ideal for your party, wedding, corporate function, and more, enquire today about bringing this excellent band to your event.

To book, contact our team of dedicated entertainment experts today.

" They were a true help with planning the event, the band made everybody's night…I don't think there was one person who wasn't blown away. "

" Amazingly professional and our guests can't stop talking about how amazing you all were, having such a great band made the atmosphere and made our day completely unforgettable! "

" I've been inundated with messages saying what an amazing band it was! Each player is obviously very talented and it's very rare to see so many people at a works Christmas party on the dance floor. "

" The band performed at a conference dinner and after party I organised. They created the perfect atmosphere. Their dinner jazz provided an excellent background to our conference dinner, and their party set was perfect for the party afterwards. They were professional, friendly and fantastic at what they do; I would definitely use them again in the future. "

" They were the perfect act for our wedding! They provided a lovely mix of background jazz during our champagne reception and a pop set for us to dance to in the evening. It was wonderful! "

" The band provided the perfect music and atmosphere for our event! We’ve already booked them again for next year! "

" The band were fantastic. We had comments all night and since about how great they were. Good set list which they adapted for us, and they were great at our first dance song. They built the songs up really well and ended on some big crowd pleasers, I don't think we ended the day looking as presentable as we did at the start after all the dancing! Very professional set up and sound checking. Very friendly group of people, they even jumped in our photo booth and signed our guestbook. They let my one-year-old nephew on the stage when they were setting up and sat with the drummer and played the drums. We booked for the full line up and really glad we did. "