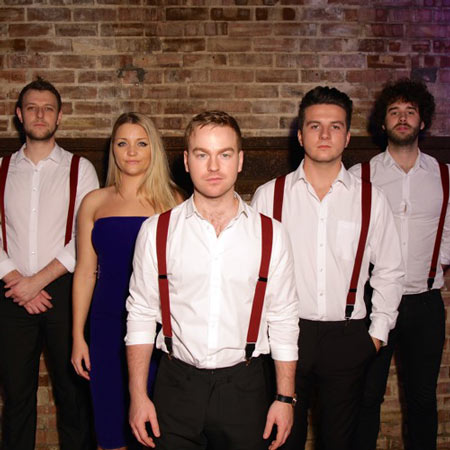 REASONS TO BOOK
Fantastic party band will captivate audiences with their musicianship and energy
Exceptional covers band with a full repertoire of songs from 60’s and 70’s classics through to present day smash hits
Consisting of male and female vocalists with successful solo careers and incredible musicians who have toured with the biggest names in pop
All five band members are also singers- their vocal performances and group harmonies are unparalleled in event and wedding bands
International party band can sing songs in seven languages-ideal for high end events across the globe
Live Music and DJ, Cover Bands

Book our sensational international party band for your event and really get the party going. This function band brings an energy, skill and diversity that puts them leagues above any other party band in the business. With a line-up of seasoned musicians who have played around the world with some of the biggest names in the music industry, this covers band can’t be beaten on the quality and excitement of their performances. If you’re looking for high end entertainment for your event or the perfect wedding band to make your special day truly unforgettable, this is the cover band for you.

This exceptional function band have already built up a reputation as one of the finest international party bands in the world, having thrilled audiences in Dubai, Antibes and Hong Kong. Their stellar musicianship and exuberant performances are sure to make them one of the most talked-about and in-demand covers bands on the international scene. Each member of this band is a highly accomplished and successful musician in their own right- both singers have launched successful solo careers and other members have directed west end musical productions and toured the globe with some of the biggest names in pop music. Each member of this party band is also a vocalist- their group harmonies have to be heard to be believed.

Playing from a diverse repertoire of classics from the 60’s through to present day smash hits, this diverse and exciting band delivers songs to fit any mood and occasion. Another feature that sets this event and wedding band is their ability to sing in an impressive seven languages, ensuring that they fit the mood in whatever country they play.

Scarlett Entertainment specialises in world class cover bands to suit any function, party, wedding or event. Contact our team to find the perfect band to suit your occasion.

" Quite simply the best wedding band I’ve ever heard! I think everyone was shattered afterwards from dancing so much! "