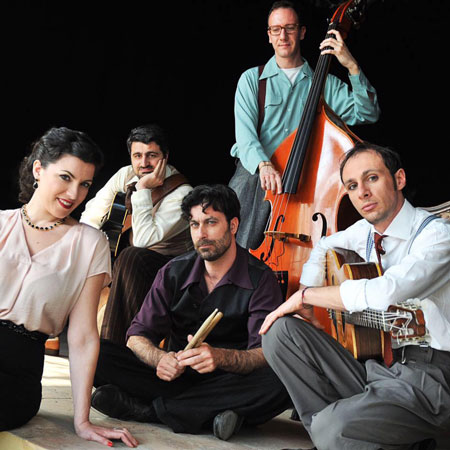 REASONS TO BOOK
Our talented group of musicians have collaborated with some of the world's greats
This band's diverse style enables them to combined a mix of swing, blues, soul, pop and close vocal harmonies
Have toured their music to hundreds of venues around Italy and across Europe
A talented female vocalist fronts the quintet and together the band have released over three albums and are signed to record label
You can hire this European jazz band in Italy, Switzerland, France and across the world
Live Music and DJ, Cover Bands, Jazz,Swing,Blues and Jive

Our Gipsy Swing Band Italy is a group exceptionally well-talented musicians who perform gipsy swing and blues, they have a also collaborated with the likes of Renzo Arbore. Our gipsy jazz touring band has even played the Christmas Concert in the Vatican City which aired on Italian national TV.

The band features a stunning female vocalist and group members who have a vast amount of experience in the music industry. Their previous experience enabled the group to create many successful albums. Members of our European jazz band play a variety of instruments at their gigs including gipsy guitar electric guitar, banjo, drums, double bass.

This band can play anything from gipsy jazz, jazz classics to rock and roll to original compositions and rock standards. Although they are an Italian band, they have an American style when they sing.

Our versatile gipsy jazz musicians perform their crowd-pleasing anthems in both English and Italian. The band's music has grown extensively throughout their career and they have also toured parts of the USA. There are not many European jazz bands out there that have a profile like Gipsy Swing Band Italy. Not only do they travel around the globe and write their music, our Italian band also provides first-class entertainment at famous festivals all over Europe.

This excellent European jazz band is renowned for its latest album release which is a swing tribute to Jazz and blues specialist the Beatles. Gipsy Swing Band Italy also perform a whole range of rock n roll, swing, blues, pop and fantastic close harmonies. Our band will work with you to ensure they achieve what you want at your event.

Scarlett Entertainment has a whole range of gipsy jazz and live music entertainment options for you to choose from.

You can hire our Gipsy Swing Band Italy by giving one of our Entertainment Coordinators a call who will happily help you with your booking.