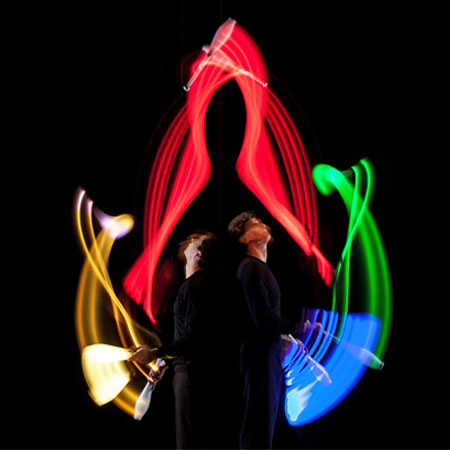 REASONS TO BOOK
Delightful Glow Juggling Act who perform with clubs, rings and balls
They have been performing for top circus companies for the last 10 years
Create beautiful glow shapes and a spectacular show
Specialise in developing advanced new forms of juggling
Based in Bristol, UK and available to perform at events worldwide
Circus Entertainment, Jugglers and Diablo, Latest Technology Acts, LED and Glow Act, Walkabout Entertainment

Glow Juggling Group is a new juggling group formed by duo, Peter and Juan. They met in 2000, while studying at Circomedia, Centre for Physical Theatre and Contemporary Circus. Whilst studying there, they both specialised in juggling and for the last ten years have been performing for some of the best circus and theatre companies in Europe.

Since January 2013, they have been rehearsing, training and devising glow shows with clubs, rings and balls to create delightful, innovative and intense shows. Juan has created his own theatre company and teaches juggling regularly to a wide range of people and Peter also is a talented acrobat who specialises in developing advanced and new forms of juggling.

Their combined skills have taken them to venues throughout Europe, Asia and South America for the last 15 years. They have created shows and walkabout suitable for galas, parties and corporate events.