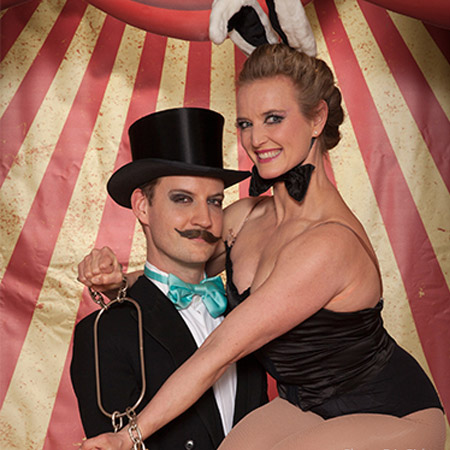 This is an entertaining and theatrical world class magic act also with dazzling acrobatics and singing.  The show features the quirky and debonair magician, his feisty assistant and the magical antics between the two of them. This award winning show has appeared in commercials and on esteemed stages throughout the UK, internationally and on live television.

They'll make a show to suit your event. The fun double-act can include sawing the lady in half, a magical and dreamy contortion dance (or aerial hoop) scene. For the finale the two performers - tied up like Houdini in chains and locks examined by the audience - change places in mere seconds.  For their hilarious twist, the magician not only escapes in 3 seconds but he quick-changes into the assistant's costume at the same time!

The show was created by a Magic Circle magician who holds a BA in Theatre Arts. The assistant is an internationally recognised dancer and acrobat.