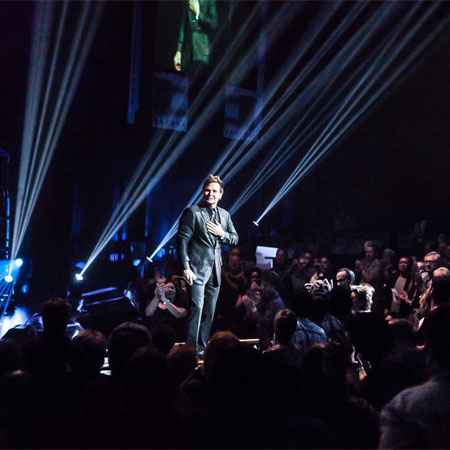 Jeff has become one of the most sought after impressionists in the world today with his array of over 100 uncanny impersonations of celebrities, well-known characters and personalities. Paying tribute to more than 50 years of music, comedy and popular culture, his shows are an incredible multimedia experience that has wowed audiences around the world.

From the most current music artists such as Bruno Mars and Pharrell Williams to legendary icons like Elton John and Bob Dylan, from comedy greats such as Adam Sandler, Joan Rivers and Ray Romano to the entire caste of Family Guy - Jeff can impersonate them all! The latest cutting-edge technology allows Jeff to transform himself into these stars so not only does he sound like them but he looks like them too.

Dubbed a ‘comic genius’ by The Los Angeles Times, he has performed in over 31 countries to sold out stadiums. His award-winning comedy performance in Agency won the Los Angeles Critics Choice Awards and Jeff has been profiled on CNN, the Tonight Show and Good Morning America! His hilarious variety shows will be a hit with audiences at any event.

" Jeff did a phenomenal performance to rave reviews. Just amazing! Your range of abilities is simply astounding. "

" Jeff did a fantastic job. From the way he personalized the show content for my client and his incredible talent - it was ALL perfect and he was a pleasure to work with! My client is still buzzing about how amazing his show was! "

" I was very impressed with Jeff and his professional team from the moment I met them. In twenty years of our Easter Seals Spring Gala I've never seen an entertainer that could so mesmerize an audience with his great performance. The show was magical and unforgettable from the start and no one left the ball room for his entire show. The enthusiastic standing ovations were proof of our gratitude and appreciation of Jeff's talents. "

" The show was a great success. Perfect for my group. We are always looking for different and exciting entertainment and Jeff fit the bill. Very professional and easy to work with. It was the quickest hour I have ever been through, great show! "