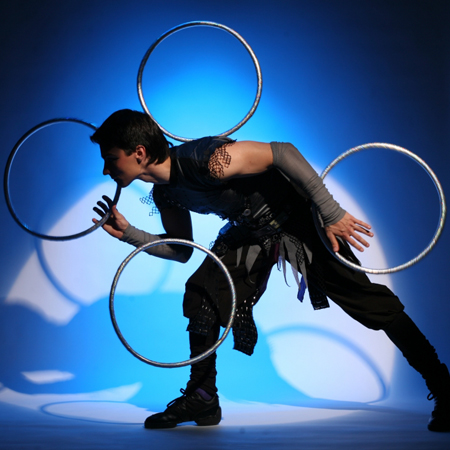 Valeri was raised in a circus family, touring through many countries in Europe and Asia. He started juggling at the age of 9 with hoops and sticks. Together with his father Eduard Tkach he created all his stick-tricks, which are unique in the juggling world. In 2000 he created his Original Juggling act under the direction of Aleksej Bitkine, which he has been performing since all over the world. In 2004 he first showed his Samurai Act at the European Youth Circus Festival in Wiesbaden (Germany).  In 2009 Valeri created a new modern act with director choreographers Tatyana Kuznecova & Vitaliy Suslovec: Vertex. For this act, the music has been specially composed by Gennadiy Diakonov. Valeri has always been looking for new techniques and tricks to improve his act.

Valerii's incredibly skilled juggling makes the audience believe in supernatural forces. Rings and sticks are thrown through the air with breathtaking precision using hands, feet and even the mouth.

At the same time, Valerii is spinning additional rings around his arms and legs. Even the most critical spectator is entirely convinced as Valerii juggles the long sticks with mouth and hands high over the heads of the stunned public. This act is the ultimate highlight of every show!