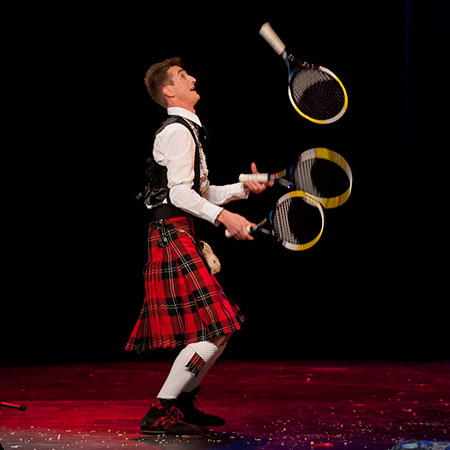 Originally a tennis teacher, Dominic decided to take his sporting abilities and combine them with his love for comedy greats such as Buster Keaton and Charlie Chaplin, and thus his one-of-a-kind tennis juggling act was born.

Learning from the famous Italian juggler Italo Medini, Dominic has certainly mastered the art, demonstrating incredible agility and skill as he juggles tennis balls and racquets in quick succession, even throwing up to 5 tennis racquets into the air and catching each one effortlessly for his big finale.

Dominic has created a unique persona for his juggling act, performing in a combination of traditional tennis gear and a kilt to mark his dual nationality, also performing the routine to a soundtrack of bagpipe music to complete the theme. With plenty of opportunities for laughs, and a stunning display of juggling expertise, Scarlett Entertainment’s Tennis Juggling Act is guaranteed to provide captivating and original entertainment at your event.