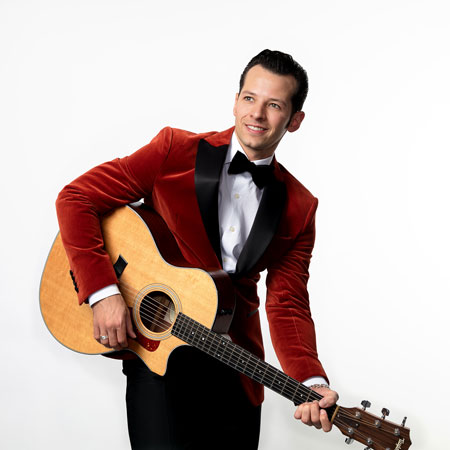 REASONS TO BOOK
West End star of renowned shows such as Hairspray, Million Dollar Quartet, Buddy Holly and Fiddler on the Roof
Seasoned act that has performed all around the world with his international one man show
Performs popular rock n roll, rhythm and blues, jazz in English, Spanish and Italian
Previous clients include; The Savoy, Dorchester, Rosewood Hotels and cruise liners such as Seabourne Cruises, Regent Cruises and more
Based in London, England and available for worldwide bookings
Cabaret and Stage Shows, 1960s and 1970s, Themed Entertainment, Live Music and DJ, 1950s and Rock and Roll, Jazz,Swing,Blues and Jive, Musical Shows

An international one man show who has performed all over the world on cruise ships and West End stages, this diverse performer boasts a show like no other that is packed with musical brilliance and showmanship interaction.

Offering a one man show that is vibrant, diverse and energetic this West End star is guaranteed to have your guests dancing in the aisles as he performs songs from the 50s and 60s. Blending some of the most famous and popular music from rock n roll to rhythm and blues, jazz and pop this male singer takes his audiences on a journey through music.

A headliner act on some of the biggest and luxurious cruise liners, this versatile singer/songwriter and actor has performed for cruise lines such as Celebrity, Holland America Line, Oceania, Seabourn, Regent, Princess, MSC, P&O and Costa Cruises.

Having starred in West End shows such as Hairspray as Corny Collins alongside artists such as Belinda Carlisle, Micky Dolenz, Brian Conley and Phil Jupitus as well as appearing in Million Dollar Quartet, Fiddler on the Roof and more.

Our singer also plays the guitar during his performances to really give it a rock n roll edge.

To book this international one man show or for more information, contact our Entertainment Specialists today.