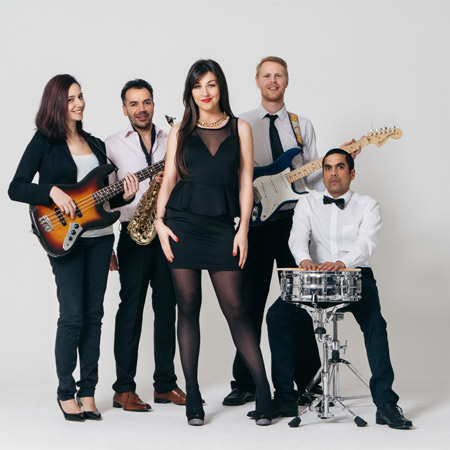 Pop Band London is a highly versatile live music band performing in and around London. Playing only the best party and dance music from the 60s to the present, the band is a big ball of energy dedicated to providing non-stop party music entertainment guaranteed to make everyone troop to the dance floor and groove. Their set list includes hits from a wide range of genre - pop, rock, retro, Motown, jazz, blues, RnB, party, and dance anthem music.

Composed of five accomplished musicians, the band is no pushover in the music industry. With over 30 years of collective music experience, each of the band members boasts of a strong musical profile. They have collaborated with the likes of Burt Bacharach, Rudimental, Amy Winehouse, Kanye West, Adele, The Police, just to name a few.

Oozing with creativity and talent, the band always seeks to stamp their own musical style to every song they play. Their highly improvisational cover of popular songs provides a fresh feel and uniqueness to their every performance. As a result, they have become highly sought after performers in corporate events, clubs, hotels, and even private parties.

" Great vocals, great songs, great musicians, created a party atmosphere, totally brilliant band!! I already have recommended them to my business colleagues and will spread the word to anyone that ever needs a band as they were fantastic! "

" [...] added a great deal to our wedding. They were easy to deal with, taking away any hassle or stress we felt in the lead up to the big day, they had a good variety of songs from which we were able to choose exactly what we wanted. They did not need any hand holding at all on the day which allowed us to enjoy our reception without having to worry about them. They are highly professional. Their performance was excellent, as mentioned by a number of the guests. They brought energy and a sense of fun to the whole thing. The highest praise I can give them is that the dance floor was packed throughout, which is exactly what we had wanted. I would highly recommend them. "

" […] were a fantastic choice. From the first contact they were professional and keen to understand what I wanted. They have a great playlist to choose from to make sure all tastes are catered for. Feedback from those at the party has been unanimous... what a fantastic band! from the first to the last song we are all dancing. Would definitely use them again! "

" I just wanted to thank you and your amazing band for such a fantastic performance on Saturday. People were absolutely blown away by you and I have to admit I'm a bit annoyed I couldn't just relax and enjoy all the songs we'd chosen - I kept hearing them and thinking 'I love that one!' then someone would interrupt me! But our guests had a fantastic time dancing away to your music and people have said to me that they'll never have a party without a band again. I was particularly struck by how perfect the jazz was when I walked in, it really was exactly what I wanted and set the tone so beautifully. If we ever need a band again I will definitely be in touch! "