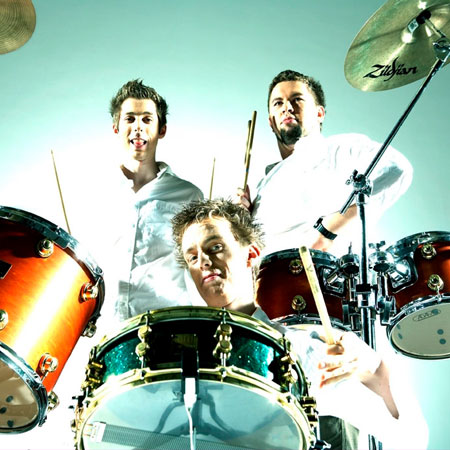 Scarlett Entertainment is one of the leading entertainment agencies in the world. Supplying everything from incredible party bands and live musicians to some of the most eccentric and unique music acts in the industry, we can source the ideal entertainment option to suit your tastes or event type. iPad Comedy Percussion Trio is an example of one of our most unusual music groups. Totally unlike any other drumming group on our roster, this comedy band specialises in high tech percussion entertainment. The iPad musicians unite real drumming with recorded rhythms to create an amazing show, certain to captivate your audience.

A feast for the eyes an ears, this drumming act showcases cutting edge musical technology alongside distinctive visuals and hilarious comedy entertainment. The personable performers in this drumming trio are all talented musicians as well as charismatic individuals. Demonstrating true friendship and genuine on-stage chemistry when they perform, our iPad musicians have produced a dynamic show, celebrating a wide range of ‘real’ and man-made percussion instruments.

With more than a decade in the industry, our comedy band love incorporating the latest technology into their drumming shows. Playing traditional musical instruments like drum kits, guitars and the xylophone, our drumming group love to drop unexpected elements into their performances by incorporating rhythms played on iPads as well as a variety of household items like cups and tables. A celebration of sound and vision, our drumming group also incorporate a variety of videos into the background of their shows for added effect.

Supplying shows of 60 - 85 minutes, or available for shorter performances, our unique music act has been booked by a wide range of prestigious clients including Coca Cola, Toyota, L’Oreal and Nike. A superb addition to a wide range of events, our iPad musicians are regularly hired to perform at corporate events, sporting matches, product launches and conferences.

Whatever your event, you can be sure that guests will have never experienced an act like this before! To book iPad Comedy Percussion Trio for your special occasion, please contact our team at Scarlett Entertainment today.