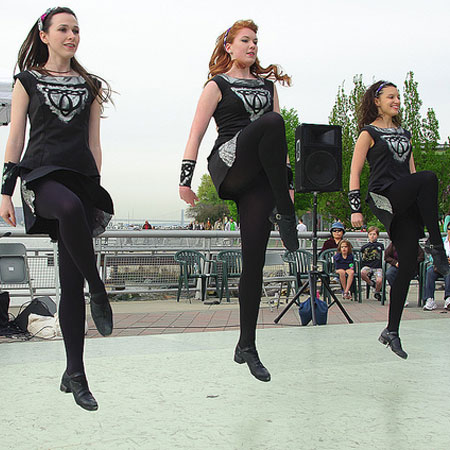 The professional Irish Dance Troupe perform at corporate events, weddings, parties, festivals, concerts and showcases mostly in the New York area. They completed a hugely successful tour of Japan with Irish folk band ‘The Suffering Gaels’ in 2001, performing 26 shows in large venues such as Osaka Festival Hall. They have also performed with Afro-Irish band 'De Jimbe' at the Rhinebeck Center for Performing Arts and Pier 63, New York City.

The Troupe have appeared in concert at The Union Square ‘Summer in the Square’ concert series in Manhattan every summer since 2001. They have also headlined The Rockland ‘Worldfest’ International Dance Festival and been featured regularly in the annual New York City Irish Dance Festival. In December 2001 and March 2002 the troupe toured America with 'The Three Irish Tenors'. The Irish Dance Troupe have also performed at the Gala St. Patrick’s Day Ball in The Plaza Hotel in New York, the American-Ireland Fund dinner, Eileen Ivers Show, Pfizer Pharmaceutical’s Corporate Show, Prudential Corporate Show and 'Shadfest' on the River Hudson.

The dancers in the Troupe are from around the world but now all live in the New York area. Together they blend their influences and experiences to create an exciting Irish Dance Show, combining traditional forms with new choreography.

" The Irish Dance Troupe performed at my Wedding in October 2007 in New York City. They were amazing, having them as part of our day was so much fun, their performance ensured everyone was excited and ready to get on the dance floor. The day would not have been the same without them. A must have for every celebration. "