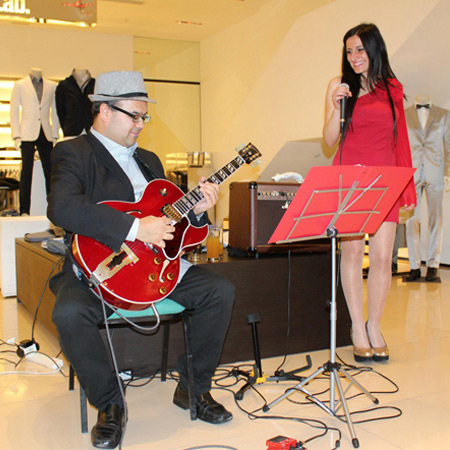 REASONS TO BOOK
Beautiful Italian style vocals and guitar/piano accompaniment
Create an impressive fusion between Italian and English sounds
Cover a range of standard jazz songs and traditional Italian classics
Have extensive experience performing in nightclubs, hotels, festivals and more
Based in London and available at perform at events worldwide
Italian, World and Cultural Acts, Live Music and DJ, Jazz,Swing,Blues and Jive

This London based Italian Duo create an impressive fusion between Italian and English sounds. With Italian style vocals and guitar/piano accompaniment the Duo perform Italian classics as well as popular covers and standard jazz songs.

Vocalist Eleonora is an Italian singer and songwriter based in London. After several TV appearances at RAI 2, the most important Italian television broadcasting organisation, she is rapidly putting her sophisticated stamp on the London pop and jazz and world music scene.

Eleonora has sang in many leading London nightspots such as The famous Ronnie Scott Bar, in Soho, the Jazz After Dark, The Intercontinental Hotel Park Lane, the Supper Club in Notting Hill, and many others.

Eleonora has performed with many top musicians and now she also performs with Robin Banerjee, guitarist of Amy Winehouse. Eleonora and Robin performed in different venues and they also performed at the Fashion Playground organised by Vogue at the Westfield Shopping Centre in Shepherd Bush.

Guitarist Gianni has being playing piano and guitar for twenty years and started to work as a professional musician at the age of 19, playing with some of the busiest function bands of the country. In the last few years he had a chance to meet and play with many top musicians including Alan Skidmore, Martin Hathaway, Brian Abrahams and Simon Spillett. He has also appeared at various festivals such as the Isle of White jazz festival, Swanage jazz festival and Marlborough jazz festival.

Together, the duo have played at hundreds of functions, corporate events and studio recordings, gaining an extensive experience in a wide range of styles. They can also be booked as a full band if needed.

" “Eleonora is a lady who has a stunning voice of an angel that can melt the coldest of hearts. Her sexy & sultry voice mixed with her beautiful Italian style and looks, make this girl a true winner. She’s had her songs played regularly on UK radio, & have become favourites with listeners. She has a warm, endearing personality that people just love.” "