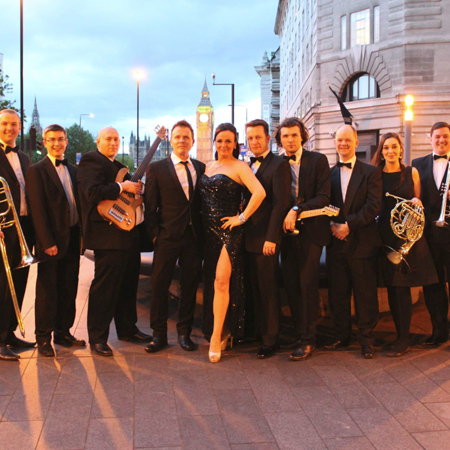 This explosive and awe-inspiring 18-piece live band perform all the title themes from the James Bond films. They were formed in 2004 as the first ever James Bond Tribute Band in the world, and have since toured the UK extensively and been flown abroad to appear at events, establishing a worldwide reputation.

In 2007, the band shared joint billing with The National Symphony Orchestra at the Quex Prom in the Park to over 6,000 people. In 2013 they appeared on the BBC for a Bond-themed TV wedding. As well as appearing at events in Monte Carlo, Guernsey, Cyprus, Gibraltar, Czech Republic, Italy, Majorca and Germany, the band has also played at almost every major venue in the UK including The Natural History Museum, NEC Birmingham, Royals Courts Of Justice, The Waldorf, and many, many more.

Whether you choose to just have Bond music, or have a set of party music, this band has all the bases covered. They have up to two hours of James Bond covers, and far more in party and dance music. Their party set is just as electric as the Bond set - and will pack any dance floor of any age range with their grooves and moves.

The band comprises of some of the very top musicians in the country from leading orchestras, West End shows and session musicians. The 18-piece version brings to your event a sound that is unrivalled when it comes to James Bond covers, and their stunning six-piece horn section is not to be missed.

The group were chosen to perform at Sir Roger Moore's Memorial Event for his friends and family - an event attended by Royalty and British Film Industry icons such as Sir Michael Caine, Dame Joan Collins, and many from the Bond films.

To book, contact our team of dedicated entertainment coordinators today.

" I still cannot believe you were able to get so many people up dancing. Your performance was outstanding from start to finish and is the main reason this event will be talked about for years to come. You set the bar so high, I have no idea how we’re going to top this next year. "

" The feedback from our guests has been tremendous. We loved the ‘Bond set’ and when you started to play as the casino was revealed, the effect was amazing. The second set provided us with a great selection of very varied music which was well received. Your diverse abilities to play and sing such great songs was just brilliant. We regularly hold functions at our home so I very much look forward to a return visit by yourself and fellow band members. "

" We would like to thank the James Bond Tribute Show Band for having made our wedding so special. Absolutely everybody commented on how great the bands were and that you were the best bands they had ever heard. Alex and I could not stop smiling from the moment you started to play and I had goose-bumps all over my body. It was just such a great night. Alex is waiting to hear about a possible date for his company dinner dance. "

Kristina and Alex, wedding in Birmingham

" When our thoughts turned to planning Sir Roger’s memorial event at Pinewood in October 2017, we knew James Bond would play a significant part and one of our first calls was to […] and the James Bond Tribute Band. They helped make a wonderful day an extraordinary day. "

" Your band was incredible! Your huge selection of iconic James Bond theme songs made our 007-themed gala come alive, and added a new level of energy to the night. The variety of vocal and instrument talent and the perfect choice of dance songs at the end, set them apart from any others I’ve heard. "