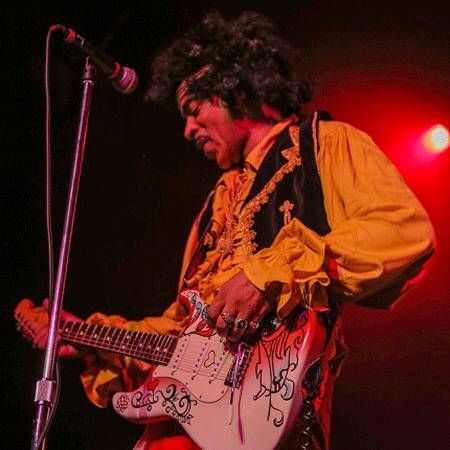 REASONS TO BOOK
A Jimi Hendrix Tribute Show that pays homage to one of the greatest guitarists of all time, Jimi Hendrix
One of the only Hendrix tribute bands that boasts a full cast of spot on lookalike and soundalikes of Jimi Hendrix’s band
Our Jimi Hendrix impersonator wears custom made 60s wardrobes that Jimi and his bandmates wore at most of their historic concerts
Perform with replica gear and backline rigs to recreate Jimi Hendrix’s most classic concerts
Based in New York, USA and available for worldwide bookings
Cover Bands, Live Music and DJ, Tribute, Lookalikes and Impersonators, Other Tributes

One of the world's greatest tributes to one of the most legendary guitarists of all time - Jimi Hendrix. Celebrating all of his greatest works our Jimi Hendrix Tribute Band recreate every detail of the iconic guitarists most renowned concerts making for the ultimate event entertainment that brings to life Jimi Hendrix’s music in the most spectacular way.

Recreating concerts such as Woodstock our Jimi Hendrix Tribute Show even features a left handed virtuoso guitarist who can play behind his back and with his teeth just like the legendary Hendrix.

One of the only Jimi Hendrix tribute bands to feature a spot on lookalike and soundalike band of musicians who represent all of Hendrix’s band members in both the Experience and the Band of Gypsys.

Performing exceptional live event music that has been perfected to sound exactly like Jimi Hendrix through replica 1960's era instruments and gear that Jimi himself made famous. Faithfully reproducing four of Hendrix’s most historic concert sets:

You can rest assured that your live event music and event entertainment is completely taken care of by our Jimi Hendrix lookalike and his band of exceptional musicians.

To book our Jimi Hendrix Tribute Show or for more information about booking event entertainment and live event music, contact our helpful team of Entertainment Specialists.

" What a fantastic show! Beyond what you would expect. They really thought it through and delivered much more than a tribute show.... I learned about the life and phases of Hendrix while they masterfully and passionately played our favourite Hendrix songs in the periods of his short life "

" They are spectacular! So often with tribute bands people say close your eyes, they sound just like them, but with this Jimi Hendrix tribute band you MUST keep your eyes open because the guitar playing, vintage gear, costumes and stage presence of the band is so very precise and out of this world your jaw will drop! "

" Loyal to Hendrix in every way: playing style, guitar tone, vocals and stage presence. As accurate as possible imitating the most iconic guitar player of the 20th Century! "

" Uncanny resemblance! Flawless performance of Hendrix music and mastering of his iconic moves! "