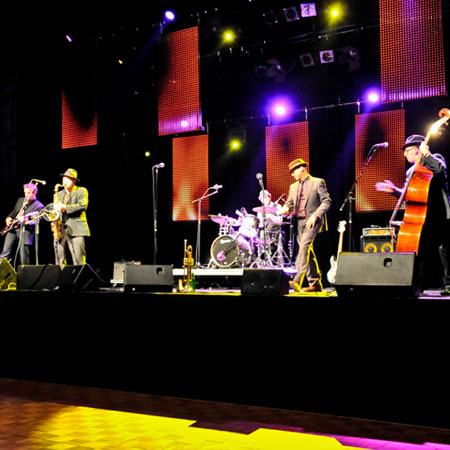 REASONS TO BOOK
One of the hottest Swing Jive and Jump Blues bands in the UK
Repertoire consists of 1940's energetic Jive & Swing & vintage Rock n Roll
Will have everyone up struttin' their stuff on the dance floor
Performed at high-profile celebrity events for: Arnold Schwarzenegger...
Based in South East England & available to perform at events worldwide
Live Music and DJ, Themed Entertainment, Jazz,Swing,Blues and Jive, 1940s and Wartime

From performing on Mahé Island in The Seychelles, The Society of Petroleum Engineers in Norway to Kelly Brook's birthday party at her London club Steam & Rye and for Sir Bobby Charlton at his Find A Better Way Charity Gala event in London, The Jive Swing Band are one of the hottest Swing Jive and Jump Blues bands to choose for your event.

Their high-energy SwingyJazzyJiveyBluesy music will guarantee to have everyone on the dance floor all night long. Their repertoire consists of 1940's energetic Jive and Swing infused with cheeky good humour although they are also able to play vintage Rock n Roll tunes, Ska numbers and a grooving Funk set should a particular event call for it. Whatever style it is, the band never fail to liven up any event so book them now - they'll cook up a storm!

" It is us who should be thanking you. You entertained everyone quite brilliantly even though we kept you waiting. We will be happy to book you again. With best regards. "

" Thanks again for playing at the event. Everyone had a great night and loved the music. We will definitely keep you on our list for other events that we're doing. "

Julia - Head of Communications, Marketing and Events at Mitie

" Thank you so much for being part of our event on Saturday. You were great and went down a storm. Lots of positive feedback from our guests about your performance. I would have no hesitation in recommending you to others or indeed using you again at a future event. Please pass on our grateful thanks to all the guys in the band for all their hard work. With best wishes "

" All of our guests commented on the band and you were really the highlight of our party ("The band was really special" was the comment from everybody the day after). Even the people who did not come on the dance floor, enjoyed the music tremendously. So a big thank you for what you did. "

" Totally awesome band - got everyone going and really made the night. We were extremely satisfied with the band; elated to be precise. They arrived promptly and set up quietly without disturbing our wedding breakfast. We had a short gap before the evening reception which is when they sound checked, and even that sounded good. After playing our first dance through the PA as it was a slightly unusual choice (Together You & I - Dolly Parton), we requested that the first song they play was "Rock around the Clock" as Emma and her dad used to dance to it when she was a child. They were the first on the dance floor and then everyone joined in. It was a great start to the evening and really got everyone rocking. The band knew exactly where to pitch the sets to keep the atmosphere going, and we have had no end of comments about how fantastic the band were. They added some funk tracks in to the last set, which kept the party going right till the end. We just bought their CDs too and currently listening to them whilst going through the wedding pics! "

" The band were an absolutely amazing swing band playing in my lounge at my 50th Birthday party. All my friends and family have commented on how terrific they were - the skilled musicianship and Mark's powerful fantastic vocals and their fun loving cheeky personality. They adapted songs for me, allowed my friend to sing a couple of numbers with them and enabled my son to perform a surprise saxophone solo with them which had me in tears as I was so proud! To summarise, I would say you will make a success of any party/event and will definitely get the party going! I would highly recommend them "

" Just a little note to say a massive thank you for making our wedding evening so much fun. So many people rave about the band and how much they loved the music. We have and will continue to thoroughly recommend you and will come and see you in concert soon. Many thanks and Blessings "

" Just a quick (belated) note to thank you and the rest of the band for performing at our wedding in June. We had an absolutely fantastic time and heard nothing but praise for you from the rest of the guests. A couple of them have since been asking for your details, so hopefully you should get some repeat business out of it all. Thanks again, it really made our night. "

" Just a quick message to say thank you so much for a fantastic evening on Saturday. You guys were brilliant, the music was spot on and everyone has commented on how great you were. We will definitely be recommending you to others in the future! "

" I’ve just got back from honeymoon and wanted to send you and the band a quick email to say a big THANK YOU for playing at our wedding on 14th June. You guys were amazing and everyone had a brilliant time dancing about. I was also loving the drum solo from my brother in law with you all – he mentioned you came and spoke to him after. Thanks again and hope you guys had as much fun as we did. "

" I am writing to express my sincere gratitude for the fantastic job your band did in entertaining the guests at our recent Gala Dinner. You performed with such spirit and energy and your music is both infectious and uplifting. As such, thank you for your contribution in making the event such a success. We have received extremely positive feedback from all those in attendance and we hope that the evening will provide a real boost to the recognition of this charity's important work. We raised over £10,000 on the night- money that will directly help us to achieve our mission of negating the effects of landmines worldwide. On behalf of the Find A Better Way Board Of Trustees, I wish you well in your future endeavours and I hope I have the pleasure of watching your band perform again in the future. Yours sincerely "